Garnering International acclaim in the jazz and R&B world throughout Europe, Africa, the U.S. and Asia, Heshima Moja is an incredibly dynamic individual. As a Bassist, Vocalist. Percussionist, Composer/Songwriter, Music Director, and Cultural Arts Presenter, Heshima has moved audiences around the world with his soulful voice, fiery bass licks, and unforgettable songs and compositions. Heavily influenced by Jazz, Afro-Cuban Rumba, Hip-Hop and R&B, he has been touching audiences with his brand of Diaspora Jazz. 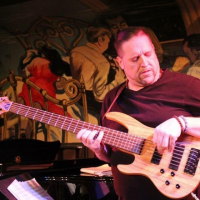 All About Jazz musician pages are maintained by musicians, publicists and trusted members like you. Interested? Tell us why you would like to improve the Heshima Moja musician page.