“Subtle romanticism” combined with a “distinctive, swinging touch” are words that come to mind when describing jazz artist Gaea Schell's style. Accomplished and versatile, she - as drummer Albert 'Tootie' Heath says, “plays the heck out of the piano with them small hands”.

Known among her peers for swinging every note, subtle phrasing, and lyrical writing, this Los Angeles-based pianist/ composer is a native of Alberta, Canada where she grew up playing music from an early age. During pursuit of a classical harp degree in college, Gaea began listening to piano greats Oscar Peterson, Bill Evans and Red Garland among others. This inspired a move East and subsequent graduation from the jazz program at acclaimed McGill University. The real learning, however, came from playing on the bandstand with older reputable musicians who spent time playing with greats like Joe Henderson, Wynton Kelly, Ella Fitzgerald. Gaea feels “it's so important to listen and to understand the tradition of this music, and to experience it -to feel swing”.

A 1999 Canada Council for the Arts grant took Gaea to New York City where she studied with internationally known pianist/composer Richie Beirach.

Gaea recently made her California debut as a featured performer at the San Jose Jazz Festival and has been performing professionally as a pianist (and recently vocalist) for over ten years in many diverse musical contexts. Her experience includes everything from trio to big band to solo work to orchestral performance. Notable artists she has played with as a sideperson include Nancy King, John Stowell, Albert 'Tootie' Heath, Tony Dumas, Bob Sheppard, Ingrid Jensen, Bobby Watson, Dan Faehnle (guitarist with Diana Krall), Earl Palmer and Gilbert Castellanos (member of the Clayton/Hamilton Orchestra).

Steadfast swing and elegance of expression - trademarks of Gaea Schell's music -guarantees her ability to engage her listeners. 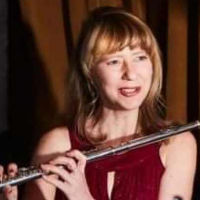 All About Jazz musician pages are maintained by musicians, publicists and trusted members like you. Interested? Tell us why you would like to improve the Gaea Schell musician page.