Steve Heckman was born in New York City. He grew up at an opportune time, getting exposed to the best jazz in the world during one of jazz's most creative periods, the mid-1960's. He began clarinet at 12, then alto and tenor sax, ultimately choosing tenor as his favorite horn. Over the years he also added soprano and baritone sax, as well as flute and alto flute. He has written 75 original jazz tunes. He is self-taught in improvisation, but thanks teachers Allen Fields, Ray Musiker and Carmine Caruso for assistance in the theoretical and technical grounding necessary to blow decent jazz.

The most significant spark to set his spirit on fire with love and enthusiasm for jazz was when, at age 15, he first heard the music of John Coltrane: Worlds split open, and he was propelled into a realm of unparallelled richness and dimension which has profoundly influenced his approach to both playing, as well as composition.

. Steve has performed with a variety of jazz greats, ranging in styles from traditional to bebop to “avant-garde”. At age 17 he was fortunate to meet and play with veteran bebop trumpeter Howard McGhee, as well as perform with pioneering trombonist Roswell Rudd's Blues for Planet Earth Orchestra (which included such greats as Charles Davis, Roland Alexander, Mike Mantler, Mike Lawrence, Lewis Worrell and Beaver Harris). At college in upstate New York Steve played with such notables as bassist Slam Stewart, trombonists Si Zentner and Urbie Green, and at the University of Illinois with the Jimmy and Tommy Dorsey bands (led by Lee Castle and Warren Covington, respectively). Over the years he has kept good company with the likes of guitarists Cal Collins, Bruce Foreman, Mimi Fox; pianists Jim McNeely, George Cables, Andrew Hill, Jessica Williams, Larry Vuckovich and Weber Drummond; drummers Eddie Moore, Donald Bailey, Pete Escovedo, and Helcio Melito; trumpeter Tom Harrell; vocalists Frankye Kelley, Madeline Eastman, Kellye Gray, Buddy Connor, and the Modernaires with Peter Duchin. Steve was a regular member of trumpeter Eddie Henderson's quintet which featured rising piano star Benny Green; he was also privileged to play loft sessions with both guitarist John Abercrombie and the late trumpeter Chet Baker. His debut CD “With John in Mind”, is dedicated to his mentor, John Coltrane, and contains 7 of Steve's original compositions. Steve has been interviewed on both San Francisco Bay Area radio stations KCSM and KJAZ. Show less

“Some of the best music I've heard anywhere.” —Jazz Now 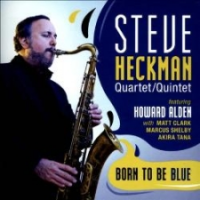 Born to be Blue

All About Jazz musician pages are maintained by musicians, publicists and trusted members like you. Interested? Tell us why you would like to improve the Steve Heckman musician page.