William Ellis, Joseph Patrick Moore and Shawn Perkinson first met while attending the University of Tennessee in Knoxville between the years of 1989-1994.

While attending U.T.K., William Ellis, Joseph Patrick Moore and Shawn Perkinson would play regularly together in a variety of settings. Upon graduating U.T.K. their opportunities and talents would lead each of them to different parts of the United States and abroad. While they would keep in touch, they wouldn't play together again for many years. That all changed in 2002, when EMP Project assembled together for the first time in more than a decade. They captured this magical meeting on their self-titled debut CD,”E.M.P. Project” released in 2003.

With the success of their debut release, EMP Project reassembled to embark on another CD recording project. This outing, now dubbed “Wherever we Go”, is an explorative and adventurous recording from this original jazz trio. 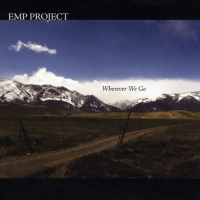 From: Wherever We Go
By EMP Project

All About Jazz musician pages are maintained by musicians, publicists and trusted members like you. Interested? Tell us why you would like to improve the EMP Project musician page.