A Minnesota native, Dorothy Doring was already singing on stage at age four and appearing on local radio at age 9. Formal voice training began when she was 12 and by 13 she was singing rock ‘n roll with a local band. After high school, Doring obtained a bachelor’s degree in vocal music at Moorhead State University, performing in opera recitals as well as area venues as a folk/pop singer. Moving to the Twin Cities after completing her B.A. degree, Doring began her career as a full-time musician, taking time along the way to earn an M.A. in Education.

Dorothy Doring is continously active in the jazz scene, her accomplishments are reflected in her achievements. Cambridge “Who’s Who” named Dorothy “Professional of the Year Representing Entertainment” (2007-2008); she was the winner of the National Anthem Project representing the State of Louisiana (2006) and the Minnesota Music Academy Award nominee for “Jazz Recording of the Year” for About Time (2002). Dorothy is also an active member of the Minnesota chapter of “Jazz Vocalists.” Doring balances performance and teaching, as a music educator for the St. Paul Public Schools and on stage at music venues throughout the Twin Cities.

A vocalist with a unique sense for musical style, a charismatic stage presence and a voice that exudes passion and experience, Dorothy's new release, Southern Exposure (Quarter Note Records), was recorded in New Orleans with producer/pianist David Torkanowsky. Dorothy is a vocalist not limited by a genre of music or proficiency of only one style. Southern Exposure celebrates the diversity of this well traveled and seasoned veteran of performance. Doring is not only a dynamic multi-faceted vocalist but Doring is also a consummate performer on stage bringing her years of experience to the forefront with relaxed, confidence that translates to a seamless presentation live no matter the style or genre of music Doring is presenting. It was the purposeful goal of Doring to create different textures vocally from track to track to show her versatility as a vocalist and her ability to translate the storyline within each song based on vocal textures, styles and delivery. The result is a wonderfully diverse and intriguing CD that keeps the listeners attention, while creating a truly unique listening experience.

A Chance meeting while visiting New Orleans in 2004, Dorothy had the opportunity to sit in with David Torkanowsky at a live performance. This chance musical encounter resulted in a collaboration that would match Dorothy with outstanding musicians who have played throughout the world with Dianne Reeves, Betty Carter, Harry Connick, Jr., Bobby McFerrin, the Marsalis family and many others. Any credits are incomplete without listing New Orleans--from French Quarter revelry to a lazy, humid stroll, the city's beats can be heard on Southern Exposure. Since she began working on the CD in 2004, Dorothy has spent most of her summers and vacation time as a “visiting resident” of the French Quarter.

Not long after the recording and mastering of Southern Exposure, Hurricane Katrina devastated Gulf Coast states, including New Orleans. Like so many others, Dorothy restlessly awaited word of the well-being of the many friends she has made in New Orleans. The loss and suffering caused by Katrina has been emotionally difficult for everyone touched by it. Thankfully, the wonderful musicians on this CD all came through with their health intact. They are now dispersed throughout the country. Southern Exposure with its delayed release to a national listening audience is dedicated to the city of New Orleans, its history, its music and its people.

On Southern Exposure, Dorothy Doring and her accompanists cover a wide range of musical terrain, while forging a cohesive stylistic approach reverential of the song itself. On “Besame Mucho,” Dorothy's emotional Spanish and English vocals are held in the arms of a sparse, smoldering, arrangement. On other tracks, the ensemble clearly exhibits its musical prowess by exhibiting searing lines of technique and style that give Southern Exposure a platform for instrumental and vocal enjoyment combined. Check out the guitar solo by Blue Note artist Steve Masakowski on “I Love Paris” and the syncopated piano chops of David Torkanowsky on Coltrane's “Giant Steps.” From the elegant balladry of “The Good Life” to the poignantly arranged remake of “What the World Needs Now” to the sultry and sassy blues cut “Don't Let the Sun Catch You Crying,” Dorothy's rich, caramel-textured vocals accentuate each cut and breath life into well recognized standards. Surrounded by the sounds and flavors of her second musical “home,” Dorothy Doring is clearly inspired by the city down the Mississippi River. Southern Exposure is a collection infused with the tasteful care of exquisite musicianship and the nuance and depth of a singer long-immersed in the art of the jazz standard. Show less

“Backed by a krewe of some of New Orleans's finest . . . Doring turns in a sublime disc that could be considered a tribute to the Crescent City's sometimes overlooked contemporary jazz scene.” ~City Pages 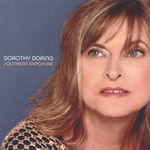 All About Jazz musician pages are maintained by musicians, publicists and trusted members like you. Interested? Tell us why you would like to improve the Dorothy Doring musician page.