Born in Birmingham, England in 1964 of Jamaican parents, Dennis cut his teeth at the age of 14 studying and performing with The Doncaster Youth Jazz Association. After years of concentrated study Dennis moved to London where his unique approach to the instrument was immediately and appreciatively recognised resulting in numerous offers of work

Dennis' reputation as an artist of excellence who is comfortable performing many genres of music has resulted in his working with some of this country's and, indeed, the world's top jazz and pop personalities. Consequently, Dennis has toured the world extensively. Though appreciated for his distinctive approach to the trombone, Dennis' style has often been compared to that of the great Fred Wesley.

In 1995 Dennis launched his own band, Dee Roe, much to the delight of funk, jazz and fusion aficionados. Though Dee Roe performed in venues such as The Jazz Café, Ronnie Scott's London, The Forum and Brixton Academy personal reasons caused Dennis to disband the group in 1997.

The five piece Dennis Rollins' Bad Bone and Co. (launched at the Barbican March, 2000) is the culmination of Dennis' vast experience as a respected bandleader and producer. With Bad Bone & Co. Dennis demonstrates a unique and exciting approach to the under-rated trombone proving that it can be an exciting front-line instrument. His high energy, groove-based funky dance music -with jazz overtones - appeals to audiences of all ages.

"the most exciting British trombonist for decades…" --Jazzwise

"...a trombone player who combines seamlessly fluid improvising with a sumptuous sound." --The Guardian

"...one of the most entertaining and inviting new funk combos currently burning up the UK scene" --The Jazz Cafe, Camden 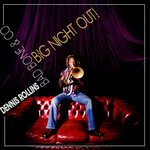 From: The 11th Gate
By Dennis Rollins

All About Jazz musician pages are maintained by musicians, publicists and trusted members like you. Interested? Tell us why you would like to improve the Dennis Rollins musician page.