David was also the Associate Conductor for the show WICKED during it's two year run at the historic Pantages Theater in Hollywood, as well as serving as an assistant conductor for the musical version of Lion King at the same venue.

In 2019 David music directed the show LIGHTS OUT : Nat King Cole at the Geffen Theater in Los Angeles and in 2020 he accompanied Chrissie Hynde and Dave & Phil Alvin on the Mose Allison tribute album If You’re Going To The City.

In 1999 David began producing a Public Access television show centered around music and performers called "Portable Universe". Episodes and segments from the show can be viewed at www.portableuniverse.tv as well as PADNET in Long Beach (Spectrum ch. 32 / Frontier ch. 41 and on demand @ www.padnet.tv), and they feature artists from around the world.

From: Signature
By David Witham 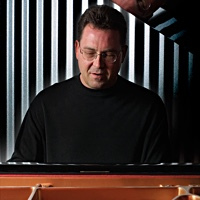 All About Jazz musician pages are maintained by musicians, publicists and trusted members like you. Interested? Tell us why you would like to improve the David Witham musician page.