Dave Pike was born in Detroit, MI in 1938, he started off as a drummer and later learned marimba and vibraphone. Pike's family moved to Los Angeles in 1954, he played backing for artists such as Dexter Gordon, Harold Land, Carl Perkins, Paul Bley and Curtis Counce. Pike played often around California and then moved to New York in 1960 to tap into a busier Jazz scene.

Pike found greater success on the East Coast, probably occurring through joining the popular Herbie Mann's group with whom he appears on several early recordings. Pike became heavily influenced by the Latin Jazz scene and in 1964, he recorded the album “Manhattan Latin” released on Decca.

1965 saw Pike session along side Herbie Hancock (of Blue Note fame), Billy Butler (of Prestige roster) and others culminating in a commercial but relatively unsuccessful (sales wise) album on Atlantic, “Jazz for the Jet Set”. Pike featured on marimba and Hancock on Hammond. A stylish Pan-Am stewardess wearing a space helmet featured on The album cover which was designed by Italian, Emilio Pucci. It was this album that Pike experimented more with soul, taking inspiration from Atlantic records who he was signed to at the time and who were synonymous with the experimental soul genre of 60's America.

Later in 1966 Pike recorded “The Doors of Perception” (taken from Aldous Huxley's 1954 book of the same name), with Lee Konitz on saxophone though it was only released by Atlantic subsidiary label “Vortex” in 1970.

Pike left New York for Germany possibly because of Atlantic shelving “The Doors of Perception” and the attraction of European open mindedness to the experimental music Pike was flirting with at that time. In 1968, Pike joined German Jazz label MPS and recruited Oscar Peterson, Jean-Luc Ponty and a guitarist named Volker Kriegel who played Indian ragas. Around this time Pike usually played vibes, Kriegel guitar, sitar and electric bass, J.A. Rettenbacher on bass, cello and electric bass, and Peter Baumeister on drums. This collective became known as The Dave Pike Set.

In 1968 “Got The Feelin” was recorded in Holland, a funky selection of tracks inspired by popular artists such as James Brown and Sam & Dave, the album was released the next year and then reissued on limited edition cd & vinyl by Wagram 1998.

The next Dave Pike album was “Noisy Silence - Gentle Noise”, released in 1969, as with many recording artists during the late 60's, The Dave Pike Set didn't escape the psychedelic influence of that era and as a result the band covered Frank Zappa's 'Mother People' and the Psychedelic Jazz sound of 'Mathar' was carefully crafted. The Dave Pike Set continued to record and entertain an avid European audience but their efforts went largely unnoticed in Pike's homeland of America. Pike showed his versatile nature again as a musician when, in 1972, he formed the “New” Dave Pike Set and recorded “Salomao” in Brazil. Pike later returned to the states during the mid 1970's and recorded several other albums of meagre success.

The interest in Jazz-Funk during the 80's (partly due to the sampling efforts of U.S. Hip Hop artists) led many djs and record collectors to delve deeper into the 60's and 70's music scene, the kudos associated with owning a rare record or groove by artists such as Pike created a new generation of vinyl hunters and Djs alike. Famous Acid Jazz DJ 'Gilles Peterson' later secured the release of 'Mathar' on Talkin Loud's “Tales From The Black Forrest” in 1994 and a rare version by Paul Weller was also released (later to be reissued on 12” vinyl), Weller's version was named 'Indian Vibes' which is what most people will incorrectly know Mathar as. A rare 12” white label boot leg of Mathar (on both sides) was also released around this time simply marked “Ind-A1” (a heavier bassline compared to the 69 album version), many other Dave Pike tracks have since been recorded or have featured on Acid Jazz compilations.

During the mid 1990's “Mathar” became popular in funk and hip hop clubs around the world, one such club was “Brothers and Sisters” which took place underneath the old ATV studios in Birmingham, England. People would search out the venue purely on the word that a bizarre record called Indian Vibes could be heard and danced to, such was the pull of the record the venue would pack out with Mathar being the highlight of the evening. Its hard to explain the effect Mathar has on a dance floor when the bass and percussion kicks in, especially over a loud sound system, renowned House Djs have also recognised the effect of Mathar and the track is occasionally squeezed into funky house sets.

Despite such underground success “Noisy Silence - Gentle Noise” remained relatively difficult to find on vinyl and hence not easily available to the masses, even the Talkin Jazz release can still be difficult to find. Mathar now occasionally makes its way onto T.V. and Radio.

Possibly because of the dusting off of Mathar in the early 90's, Dave Pike later released “Bop Head” in 1998 and then several other albums, including “Peligroso” in 2000, on the Ubiquity record label based in San Fransisco, Pike still plays percussion and now resides in Los Angeles, U.S.A. Show less 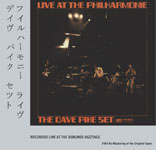 All About Jazz musician pages are maintained by musicians, publicists and trusted members like you. Interested? Tell us why you would like to improve the Dave Pike musician page.