Danny Sinoff was born in Massachusetts and grew up in Naples, FL. He studied classical piano since the age of two. At 17, Danny discovered jazz, to which he applied his classical technique and creative energy, later developing his own personal jazz vocal style.

After graduation from Barron Collier High School, he attended the Berklee College of Music in Boston pursuing a degree in Piano Performance and Music Technology. After a year, Danny decided to return to Naples, where he gained invaluable experience working with professional musicians.

Danny has appeared at the Apollo Theater in New York City and at the Syracuse Jazz Festival.

Currently Danny appears at the Roadhouse Cafe in Ft. Myers FL as well as other venues.

A fine ambassador for the Great American Songbook - and more 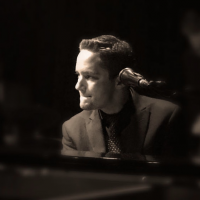 All About Jazz musician pages are maintained by musicians, publicists and trusted members like you. Interested? Tell us why you would like to improve the Danny Sinoff musician page.