Cleve has been playing drums since 1961.

Cleve has been playing major venues in the Phoenix area with convention support groups and has been a show player since 1981.

Joel, Delphine and Cleve have performed at the Glendale Gaslight Inn and Oscar Taylors. Currently this group is performing at Luci's Healthy Marketplace on Saturday nights. Frequently local players stop by, bring their “axes” and sit and play. Notable players such as Judy Roberts, Jim Martinez, Jack Peterson, Dan Pinson and many others sat in on many of Cleve's sessions.

When you heard live music at Nordstrom's in Scottsdale, you were listening to Cleve play with Richard Palalay and Trio 380. This band also featured Felix Sainz and Brent Mendoza. Show less 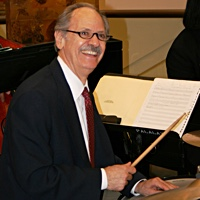 All About Jazz musician pages are maintained by musicians, publicists and trusted members like you. Interested? Tell us why you would like to improve the Cleve Huff musician page.