In the truest spirit of the jazz tradition, Carla White devoted her life to artistic exploration and growth. Born in Oakland, California and raised in Bellport, New York, Carla earliest musical education came from her parents' record collection, listening to "everything from Stravinsky to Sinatra" But her discovery of jazz at the age of 13 had a profound effect, setting her future in motion. "The first time you hear jazz - really hear it", she explains, "if it connects with your soul, it changes your life."

After years of study in music, drama and dance that included two years at London's prestigious Webber- Douglas Academy of Dramatic Art, she embarked on a personal journey of exploration through Europe and North Africa. For nearly a year she traveled amidst the rich cultural diversity, singing in the streets, and even living in a cave. Remembering that uniquely edifying time Carla says: "I traveled in an old VW van with no planned itinerary. I went wherever I felt like going whenever I felt like going there. The one exception was Franco's Spain where I spent a night in prison for no reason other than being young and foreign. Everyday was a leap into the unknown. Now I satisfy my desire for adventure by leaping into a solo and exploring new musical territory. "

Upon returning to New York City in the early 70's, her jazz studies began in earnest with the legendary innovative pianist/composer Lennie Tristano. Combining the lessons learned from her mentor with the age-old jazz method of singing along with recordings of master improvisers like Lester Young, Charlie Parker, Billie Holiday and Fats Navarro, Carla developed the jazz vocabulary that has earned her such critical praise as:

"One of the most impressive performers to come along in years ...an unusually accomplished interpreter" (Howard Reich, Chicago Tribune): and "a singer who blends interpretive intelligence -with a solid musical grounding and a sure sense of swing" (Don Heckman, Los Angeles Times).

After Tristano's death in 1978, Carla continued her studies with another of his proteges, saxophonist Warne Marsh. Focusing on scat singing in the wordless instrumental style that has always been the cornerstone of jazz vocalizing, she established her first band, a bebop quintet with trumpeter Manny Duran and did a recording for Stash Records, Andruline. Cadence Magazine declared, "Carla White is a scat singer like the Pope is Catholic."

Taking every opportunity to learn and grow, Carla waited tables at Hanratty's a now defunct, but well-known New York club that featured top stride pianists like Dick Wellstood, Ralph Sutton,Davee McKenna and Johnny Guarnieri. Working the late shift, she would often perform a few numbers with the featured pianists, learning in the most classic on-the-bandstand tradition.

In 1985 Carla launched her critically acclaimed career as a solo artist. In 1987 she produced her first album for Milestone Records, Orient Express. Named one of the "Best Albums" of the year by Jazziz magazine and "Recommended Listening" by Billboard, it was also a "Feature Pick" in Cash Box. Mood Swings was released by Milestone in 1988 to similar response, and Carla was recognized in Downbeat's 37th Annual International Critics Poll as "Talent Deserving Wider Recognition". Listen Here was released in 1995 by Evidence Music and was named one of the best CDs of the '90s in Downbeat. Her 1999 release Carla White Live At Vartan Jazz was cited in the Cadence readers' poll and an editor's choice as one of the best new issues of the year. Carla White in Mexico was released in January 2000 on the Jazz Cat label, and her seventh and most recent CD, The Sweetest Sounds was released in November 2000 on DIW.

Over the past 15 years Carla's live performances have taken her all over the world - from top New York clubs like Birdland and The Blue Note to Mexico's Festival Internacional de Musica to well above the Arctic Circle with her summer 2000 tour of Norway and Sweden.

Other highlights include New York's Weill Recital Hall at Carnegie Hall, Town Hall and the Texaco Jazz Festival; The Kennedy Center in Washington, D.C.; the Ottawa International Jazz Festival; the Chattanooga Riverbend Festival; and the Mellon Jazz Festival in Philadelphia.

She is also a respected teacher, having conducted seminars, workshops and master classes for The New School, Vermont Jazz Center, University of Northern Colorado, Sweden's Birka School of the Arts, and the Music Conservatory of Ghent while on tour in Belgium and The Netherlands.

Carla also had an active career as a voice-over artist and can currently be heard on TV and radio commercials for Estee Lauder, Neutrogena, Ethan Allen, Caltrate, and more.

When asked what success means to her, she replies: "Success to me is making the time to cultivate not only your talent and gifts, but being present in the moment and living your life with kindness and compassion for yourself and everyone you come into contact with. In terms of my career, success is playing with the musicians I love to play with in situations where the audience is receptive and appreciative. " Show less

"One of the most impressive performers to come along in years...an unusually accomplished interpreter." --Howard Reich, Chicago Tribune

"A singer who blends interpretive intelligence with a solid musical grounding and a sure sense of swing." --Don Heckman, Los Angeles Times.

A Voice In the Night

A Voice In The Night 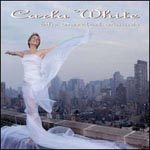 All About Jazz musician pages are maintained by musicians, publicists and trusted members like you. Interested? Tell us why you would like to improve the Carla White musician page.