Brent Fischer is a BMI artist and continues to create West Coast sounds carved by the likes of the elder Fischer and Cal Tjader. Brent's arrangement work appeared on the 2016 Grammy Winner: R&B Song and Album - for “Really Love,” by D'Angelo & The Vanguard from the album: Black Messiah. Other arranging credits include: Prince, Elvis Costello & the Roots, Sheila E.

Working professionally in the music industry since age 16, Brent Fischer has performed with groups from more than 20 different countries on 10 different instruments. Brent Fischer + The Clare Fischer Latin Jazz Group was featured at the 2015 and 2018 Latin Jazz series at LACMA (Los Angeles Contemporary Museum of Art), Santos Festival in Brazil, and numerous public and private live engagements in Los Angeles.

PICTURES is the new album from Grammy®-winning Brent Fischer with his modern interpretation, for big band, of Mussorgsky’s classic: Pictures At An Exhibition.

PICTURES is produced by Brent Fischer for Clavo Records and recorded at the Village Studios with engineer Matt Brownlie. Fischer talks about his inspiration for PICTURES. “As a percussion major at Northridge University, I had the opportunity to listen to the more active players in the band and the idea was hatched! Over the years, our live performances have inspired me to develop the arrangements you hear on this album today,” says Brent who kept the musicians working during the Covid pandemic. Order PICTURES here https://brentfischer.com/

”In Brent Fischer's capable hands, it seems the music of Clare Fischer will live on for years to come, in a big band paradigm or some other framework. And that's a good thing for musicians and listeners alike. Pacific Jazz exudes a charm that ensnares both heart and mind.” —Jack Bowers (All About Jazz)

“Clare Fischer was a major influence on my harmonic concept … I wouldn’t be me if it wasn’t for Clare Fischer.” – Herbie Hancock 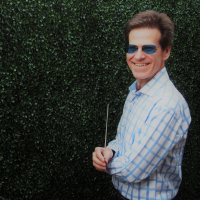 All About Jazz musician pages are maintained by musicians, publicists and trusted members like you. Interested? Tell us why you would like to improve the Brent Fischer musician page.