In 1990, he moved to Paris where he led his own groups and performed with such artists as Steve Arguelles, Ronan Guilfoyle, Riccardo Del Fra, Mory Kante, Horace Parlan, Johnnie Griffin, Ben Sidran and Youssou n'dour. He played on Radio France and taught at the American School of Modern music.

He is featured on numerous recordings, including The Future Was Yesterday, newly released in 2005, and two Grammy-nominated recordings with Kurt Elling, Man Up in the Air, and This Time It's Love. He has written arrangements for Joe Henderson, Benny Golson and Kurt Elling, composed works for jazz and studio orchestra, and written music for independent film and video projects. He earned his Master of Music degree in jazz studies and contemporary media at the Eastman School of Music. He also studied contemporary music composition with Salvatore Martirano, attended Dave Holland's Jazz Workshop in Banff, Canada, and was awarded a National Endowment for the Arts jazz grant to study with Dave Liebman in New York City. 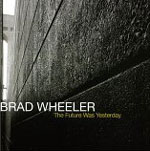 From: The Future Was Yesterday
By Brad Wheeler

All About Jazz musician pages are maintained by musicians, publicists and trusted members like you. Interested? Tell us why you would like to improve the Brad Wheeler musician page.