Chicago is one of those unique cities that has always been on the pulse of vangard change in popular music. Although the city is known most for its blues , Chicago has also played a leading role in the performance, recording, and artistic evolution of jazz. The BMR4 (Bernhardt, Moynihan, Rodbard quartet), veterans of the Chicago music scene, have proved to be quite adaptable in creating noteworthy musical mixtures of all idioms. You can hear in their jazz sound, flourishes of the city's blues, rock and R&B scenes.

As legendary guitarist Robert Johnson put it, Chicago has been a “sweet home” for the blues. As the most recognizable cultural signature that the city has produced, its rich sense of origin and history still shapes music and social practice throughout the Windy City. Chris Bernhardt, Jay Moynihan, and Mike Rodbard had their musical baptism in the blues-roots rock band The Buzz. Although the group made two recordings, sold over 10,000 recordings, and toured the country, these musicians' chops developed significantly while playing as the house band at Buddy Guys Legends. It was there that they backed up legends such as Buddy Guy, Junior Wells, and Otis Rush. Through the many gigs and tours, the band found out they had a mutual affinity for jazz, and missed playing the music they grew up on. They formed BMR4, found a regular engagement, and began to develop their sound.

But The BMR4 needed a guitarist. Neal Alger had known Chris Bernhardt for years growing up together in the same south suburb neighborhood. Performing or recording with Lin Haliday, Howard Levy, Grazyna Augusich, and Ed Thigpen, Alger, due to his lyrical soloing and accompanying , had become one of Chicago's greatest and most in demand guitarists. The group soon recorded a standards demo and set out to get some work.

Success came fast for the BMR4, which was unusual for its groups member who had spent years “paying their dues”. It helped that the bands' live show is an energetic,vigorous experience, in which the repertoire leaps around from 60's modal jazz, standards, modern R&B, 12 bar blues, to unique interpretations of pop classics. They soon began playing major venues in the Chicagoland area. Success also came to the groups members with Alger, Moynihan, and Rodbard being picked up for the bands of Patrica Barber, Buddy Guy, and Lonnie Brooks respectively. In the spring of 2006 the band signed with Hallway Records.

That recording is called “Turning Point”. An appropriate title, as it is a statement of where the band is not only career wise, but creatively as well. That's because this recording is the first time original compositions entered the groups repertoire. The cd starts with “ No Means No”, a Blakeyish, soul tune with a killer shuffle by drummer Mike Rodbard, a groove that lovers of roots music know just doesn't develop overnight. This tune, as well as the next one, “Turning Point”, is by guitarist Neal Alger, written with the groups sound in mind. It's a modern piece that displays the slippery, shifty interplay of Alger, and saxophonist Jay Moynihan. “ Wrong Way” a Moynihan composition, deceptively sizzles, as the rhythm section shows equal energy and restraint . “The Blues at Clark and Addison”, a group work, shows those Chicago blues chops, while once again lamenting another abysmal season spent at baseball's “shrine” or 'house of horrors” (take your pick).

The rest of the program is filled out by what noted jazz critic Neal Tesser sighted as “ their oceanic reper toire”. It is certainly diverse- some tunes going to early sources like the fanciful mambo “La Roista”, a tune Coleman Hawkins recorded with Ben Webster, as well as Fats Wallers', “Jitterbug Waltz” whose token motif is given the weekend night, late night, carousing treatment. Speaking of a party, Horace Silvers' “The Preacher” is one, this time with the New Orleans treatment. When leader/bassist, Chris Bernhardt first got into jazz, on heavy rotation on his stereo was Sonny Sharrocks' “Ask The Ages”, a date that paired the New York City guitarist with Pharaoh Sanders and Elvin Jones, among others. The sublime “What Does She Hope To Be” does the original justice, with outstanding group interplay on this graceful composition. “Ain't It Funky Now”, a number from musical pioneer James Brown, is good example of what one would hear at a BMR4 live show. Finally, Black Sabbaths “Iron Man” is given a radical work-over, with tongue held firmly in cheek, of the heavy rock classic (inspired by, although completely different from, Sweden art-pop band, The Cardigans). “Turning Point” is the title, and a statement of where The BMR4 is at now. Come join in on the ride. Show less

“The CD is terrific... the band is tight and the production first-class.” --Rick O'Dell, Music Director, WNUA 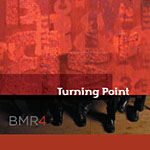 All About Jazz musician pages are maintained by musicians, publicists and trusted members like you. Interested? Tell us why you would like to improve the Bmr4 musician page.