Hailing from the fertile scene of Portland, Oregon, the Blue Cranes create music that is as invigorating as it is disarming. Working a thin line between improvisation and catchiness, Blue Cranes arrive at a unique place. They have found a way to make exploration seem like the most enjoyable process around.

The group, composed of Reed Wallsmith (alto saxophone), Joe “Sly Pig” Cunningham (tenor saxophone), Rebecca Sanborn (keyboards), Keith Brush (acoustic bass), and Ji Tanzer (drums), began working together as a quintet in 2007 (originally recording as a quartet in 2006). Over the past three years, the band has begun to reap the rewards of a collective articulation: a truly individual sound that depends on the contributions of each member.

Blue Cranes have performed at rock, punk and jazz festivals down the West Coast. They have shared the stage with John Hollenbeck’s Claudia Quintet, Wayne Horvitz’s Sweeter Than The Day, Michael White, The Youngs, Thruster!, Cuong Vu, Portland Cello Project, The Tiptons, Mi Ami, Priestbird and Horse Feathers. Clubs regularly showcase the Blue Cranes on tour, and the band has played in-studio sessions at the region’s top radio stations for creative music, including Seattle’s KEXP and Portland’s KOPB.

"Consider the band a brainier kinfolk to the indie rock scene, and with influences from rock and other areas, but with a solid foundation in the vocabulary of jazz." - JOSEF WOODARD, Santa Barbara News-Press 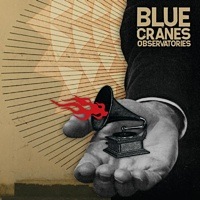 All About Jazz musician pages are maintained by musicians, publicists and trusted members like you. Interested? Tell us why you would like to improve the Teddy Presberg musician page.