For a brief moment in time, Blood, Sweat & Tears were one of the biggest rock bands in America, scoring giant hits like “You’ve Made Me So Very Happy” and “Spinning Wheel,” winning a Grammy for Album of the Year — despite facing off against the Beatles’ Abbey Road — and playing a triumphant set at Woodstock.

But at the pinnacle of their fame in 1970, they went on a State Department-sponsored tour of the Iron Curtain nations Poland, Romania, and Yugoslavia. Thanks to the ongoing Vietnam War, it was a time of maximum distrust in government and the tour sparked a huge fan backlash. They were never able to regain the lost momentum and their fortunes rapidly waned throughout the Seventies.

The upcoming documentary What The Hell Happened to Blood, Sweat & Tears? will finally tell the band’s complete story, using 65 hours of unseen footage shot on the band’s infamous Iron Curtain tour, which was much more complicated than most fans understood at the time. 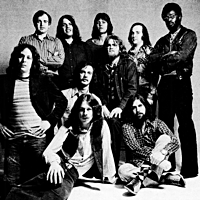 All About Jazz musician pages are maintained by musicians, publicists and trusted members like you. Interested? Tell us why you would like to improve the Blood, Sweat & Tears musician page.