It all started in New Orleans, Bill's grandmother was born near New Orleans in the town of Franklin. His Father, John, was a jazz pianist and banjoist on many of the steamboats of the great “Strickfus Line” playing in and around New Orleans as well as up and down the Mississippi and Ohio rivers.

Bill Allred was also born near the Mississippi River in the town of Rock Island. He played trombone at Rock Island High School, in the U.S.Navy Band and at St. Ambrose College.

In 1971, Bill auditioned for the position of staff musician at the new Walt Disney World attraction in Orlando, Florida. He was chosen as one of the original 200 staff musicians from over 2500 auditioned.

In 1974, Bill's next stop was at Rosie O'Grady's in Orlando, Florida where he organized the Goodtime Jazz Band and produced the world-famous Goodtime Show. Bill Allred remained at Rosie O'Grady's for over 15 years serving as Entertainment Director and Band Leader. Bill's production efforts have been rewarded by many accolades, among them, the coveted Carbonel award given by Florida Entertainment writers for excellence in show production.

In 1991 Bill accepted an offer to return to Walt Disney World as a staff musician. In addition to Disney, he continues to head up his own entertainment production company in Orlando and is involved in many musical activities. With all of these activities, Bill still finds time to broaden his musical scope by traveling, performing and recording throughout the US and in Europe.

For some years, Bill was a member of the Wild Bill Davison Jazz Band, traveling to Switzerland, Germany, Sweden, Denmark, England, South America and at many other festivals and concerts worldwide. Bill still remains a member of Wild Bill Davison Legacy Band, a group championed by cornetist Tom Saunders. The Wild Bill Legacy recently performed concerts in Lacrosse, Wisconsin and Sacramento and returned to Europe in 1995 on their 10th Anniversary tour.

Now in its 19th year of existence, Bill Allred’s Classic Jazz Band was born in 1990 as a group of ex-Rosie O’Grady and Disney musicians when the staff musician roles in both places began to erode. They started essentially as a “kicks” band, collecting and playing the arrangements of Matty Matlock and Billy Maxted. After performing at a few jazz festivals, they realized that there was a real market for their “little big band” type of sound. That was more than 18 years and 12 recordings ago.

Going to a Classic Jazz Band set is much like attending a symposium on the history of jazz. You are apt to hear anything from Jelly Roll Morton to Count Basie and all the stops in between. The band uses the five-horn front line typical of such bands as those of Matty Matlock, Billy Maxted and Red Nichols, and the World’s Greatest Jazz Band.Early in the band’s career Bill was able to acquire a major portion of Matty Matlock’s Paducah Patrol library, thanks to Matty’s son, Buddy. All of Matty’s charts were essentially written for 10 musicians, but some were more easily adaptable to the Classic band’s eight. Bill Allred’s Classic Jazz Band has performed and recorded some of the arrangements with all 10 parts by adding a baritone saxophone and a guitar. In 2007, the 100th anniversary of Matty Matlock’s birth, the band performed tribute concerts with a full 10-member ensemble.

Over the years, the Classic Jazz Band has added quite an eclectic collection of written and improvised jazz to its library. After learning of the band’s desire to tour with a classic library, noted pianist and arranger Billy Maxted contributed quite a few of his great charts. Other contributors include Bob Haggart, legendary writer and performer Joe DeWeese, Dave Wolpe, Scott Whitfield, John Bambridge, Terry Waddell and Dave Mackenzie, as well as the band’s own John Allred and Bob Pickwood. Bill Allred’s Classic Jazz Band has appeared at jazz festivals and/or presented concerts in Sacramento, Palm Springs and Mammoth Lakes, California; Davenport, Iowa; Madison, La Crosse and Milwaukee, Wisconsin; Sun Valley, Idaho; the Jazz Café at the Smithsonian Institute in Washington, D.C.; Johns Hopkins University in Baltimore; and in theaters and jazz clubs all over the country. Overseas trips have taken them to Hong Kong, Switzerland, Germany, Austria, England, Scotland, Italy and South America. In Rome, they performed a benefit for the World Food Program at the Jazz Club Alpheus. They also been the featured band on several Jazzdagen cruises and on the Mississippi Queen riverboat. Show less 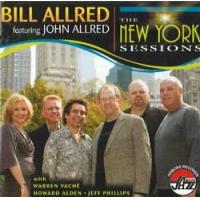 All About Jazz musician pages are maintained by musicians, publicists and trusted members like you. Interested? Tell us why you would like to improve the Bill Allred musician page.