Since arriving on the New York scene in 2003, vocalist Abigail Riccards has garnered much attention from the jazz community for her effortless swing, heartbreaking tone, and personalized approach to lyrics. Abigail's inimitable approach to the Great American Songbook has made her one of the most celebrated jazz vocalists of her generation.

In 2000, she was also selected to participate in the Jazz in July workshop at the University of Massachusetts in Amherst and competed in the 2006 Fish Middleton Competition, where she was a semi-finalist. In 2004, Abigail was selected to be a semi-finalist in the prestigious Thelonious Monk International Jazz Competition, where she competed at the Smithsonian Institute in Washington D.C for judges such as Kurt Elling, Al Jarreau, Jimmy Scott and Dee Dee Bridgewater.

Abigail's first album, When the Night Is New was released to rave reviews. It featured the talents of David Berkman, Ben Allison, Matt Wilson, Adam Kolker, Ron Horton, Lage Lund, Rogerio Boccato and was produced by Dena DeRose. Ken Dryden calls it "an outstanding debut effort by the promising jazz vocalist Abigail Riccards." Abigail followed it up with her 2011 release Soft Rains Fall, an intimate collection of jazz and popular standards, recorded in a duo setting with nylon string guitarist, Tony Romano.

Recently, Abigail moved to Chicago where she has quickly established herself as one of the rising vocalists of its unique jazz scene. Since moving to Chicago she has performed at many of the top jazz clubs with some of Chicago's most well-respected musicians, headlining at venues such as the Green Mill, the Jazz Showcase, and Andy's Jazz Club.

Since earning her Master's Degree, Abigail has also become an active music educator. She teaches privately and conducts many college workshops. Recently, she has conducted vocal jazz workshops at Hunter College and Clark University. Abigail was also selected as a collaborator for David Berkman's The Jazz Singer's Guidebook: A Course in Jazz Harmony and Scat Singing for the Serious Jazz Vocalist on which she recorded the vocal examples for the accompanying CD. Abigail is also a licensed Music Together instructor and brings her knowledge of cognitive musical development to the forefront of her teaching approach, an approach that effectively merges her extensive performance experience and her sensitivity to different students and learning approaches.

Abigail resides in Chicago, and frequently performs in Illinois and in New York City. She is also currently teaching private lessons and workshops throughout the country. Her third studio album, "Every Little Star" which is coproduced by Jane Monheit is due out in April. All of the proceeds of this upcoming album will go to benefit a fantastic NYC based nonprofit called ArtStrides (www.artstrides.org). Show less

Abigail Riccards Live at the Kitano on October 8th

Abigail Riccards at the Kitano on April 4th

"You know that cliché about a voice so beautiful that you wouldn't mind it singing the phone book? I'm ashamed to say that I've got to dust that one off for Abigail Riccards. The song [I'll be seeing you] itself has been done by so many singers that I was surprised to find myself looking up from my writing pad as the first verse passed. Guitarist Lund floats a gorgeous chord melody underneath the vocals...and oh, the vocals! Riccards has a lovely, finely textured voice and the delicate trills added at each line's end made me wish I'd known this version forever." Mark Saleski - www.jazz.com 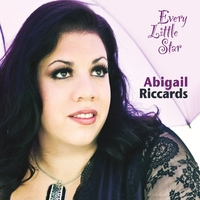 When The Night Is New

When The Night Is New

All About Jazz musician pages are maintained by musicians, publicists and trusted members like you. Interested? Tell us why you would like to improve the Abigail Riccards musician page.