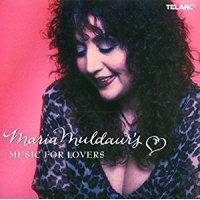 Maria Muldaur is blessed with a voice that's both supple and sassy. In fact, her singing seems to grow more soulful with each album. Muldaur has tackled a lot of genres during her 57 years—everything from jug band music to bluegrass to rock to jazz to gospel to children's music. Over the last decade or so, Muldaur has focused primarily on blues and rootsy pop. Always smart about her musical choices, she is particularly effective on sultry, seductive numbers like the 11 tunes compiled here.

Though this CD is plenty voluptuous, there's no reason to buy it if you already own Fanning the Flames, Southland of the Heart and Meet Me Where They Play the Blues. The songs are lifted entirely from Muldaur's three previous releases on Telarc, recorded between 1995 and 1999. But if you liked Muldaur's estrogenic radio hit "Midnight at the Oasis" and haven't heard her output since the 1970s, Music For Lovers is a fine introductory sampler. The focus is on slow, steamy songs that celebrate romantic passion, and Muldaur's bluesy voice is perfectly suited to such material.

Music For Lovers includes tunes written by Greg Brown ("Think About You," "Someday When We're Both Alone"), David Steen ("Latersville), John Hiatt ("It Feels Like Rain"), Bruce Cockburn ("Southland of the Heart"), and other underrated songwriters. The songs vary between bluesy, intimate numbers colored by atmospheric electric guitars and keys, to jazzier, horn-and-piano-based tunes from Muldaur's last release Meet Me Where They Play the Blues, including the singer's classy duet with Charles Brown on "Gee Baby, Ain't I Good To You." While a few more up-tempo numbers might have added an energy boost to this collection, it still rates as a fine musical paean to that oldest of human activities: makin' whoopee.

Lyrically, the album is best summed up by lines from the song "I Wanna Be Loved:" "I feel like acting my age. I'm past the stage of merely turtledoving. I'm in no mood to resist. And I insist the world owes me some lovin.'"

Fanning the Flames; Think About You; Latersville; It Feels Like Rain; Gee Baby, Ain't I Good to You; We Can Let It Happen Tonight; Soothe Me; Talk Real Slow; I Wanna Be Loved; Someday When We're Both Alone; Southland of the Heart.