When pianist Keith Tippett's young daughter was asked at school what her parents did, she replied: they're mujicians! That conflation of magic and music neatly sums up Tippett's method. Initially the name was applied to his solo work, but latterly to the long running all-star quartet of saxophone colossus Paul Dunmall, bassist Paul Rogers, and drummer Tony Levin, alongside the pianist. Over the 22 years of their existence the aptness of the moniker in relation to the group's collective concept has been affirmed many times, and they are now lauded as one of the UK's premier improvising ensembles. This year also saw Levin's 70th birthday, and in honor of that milestone, Birmingham Jazz in the person of Tony Dudley-Evans, organized a double tour for Mujician, along with Berlin-based Japanese pianist Aki Takase's trio also featuring Levin as well as bassist John Edwards. 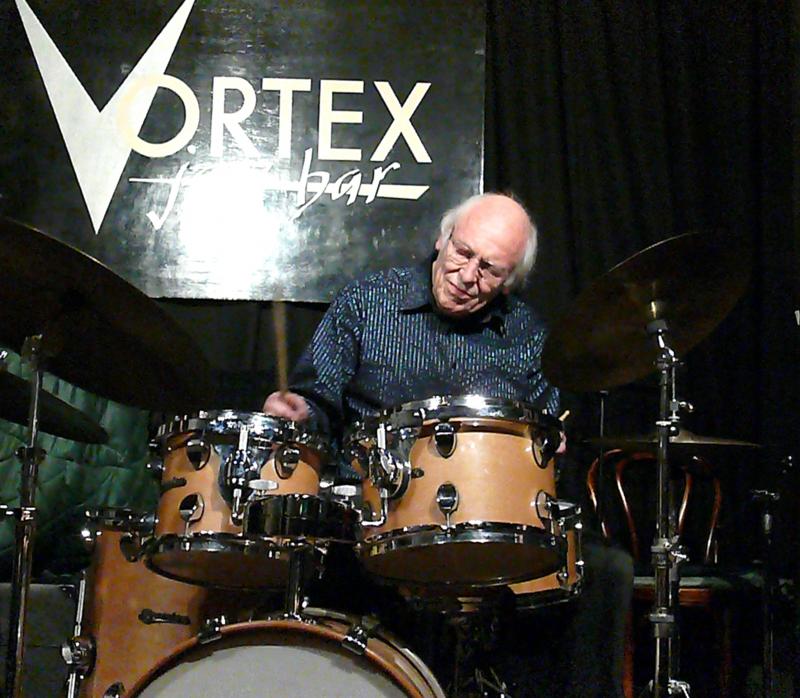 Neither Takase nor Mujician perform regularly in the UK, so even though it was a Monday evening it was no real surprise to find a standing room only crowd jammed into north London's Vortex Jazz Club. Takase's trio was first onto the stage. Unlike Mujician, the Berliner's group dates back only as far as the 2008 On the Outside Festival in Gateshead, when the pianist was first matched with Levin and Edwards. That successful meeting was documented on a week went by (psi, 2010), and it clearly made a lasting impression on all sides sufficient for the trio to be reunited for this tour.

Takase, glamorous in black dress and red lipstick, showed herself to be an exciting free form pianist, and one of the more physical of that genre. Over the course of four pieces during a 40-minute set she attacked the keyboard with flats of hands, heel of hand, and forearm smashes, sometimes all in quick succession. Such tropes were judiciously used within what was a commanding display, high on rhythmic attack, full of vim and joie de vivre.

Right from the off it was evident that tonight's fare was to be more uncompromising than much of her recorded output might lead a listener to expect. Starting with a flinty give and take, the trio was powerful and aggressive. As the interplay reached a climax Takase half stood and signaled a quietening to leave Edwards alone riding monstrous bass notes, before the pianist rejoined in slower deliberate measure. Edwards' percussive bass encouraged Levin to pitch in too with a steady pattern, which both bass and drums locked onto and over which Takase gradually lengthened her thickening lines until they all took off for another high energy flight.

In the liners to a week went by Bill Shoemaker talks of Takase as a complete player, in reference to recordings based around the oeuvres of Fats Waller and Ornette Coleman, or early blues. Glimpses of what he meant were on show here too. At times the improvised flow channeled more familiar phrases, slipping into what sounded like Monk through a distorting prism. But if there was any thought that the free stuff was foreplay before consummation of a standard, it was to be unrequited, as such snatches proved ephemeral, and in a blink of an eye, the trio had moved into other realms. Edwards and Levin established their credentials as willing accomplices, leading as often as following, each getting the chance to shine within the ambit of the extemporized pieces, before the trio kicked in. 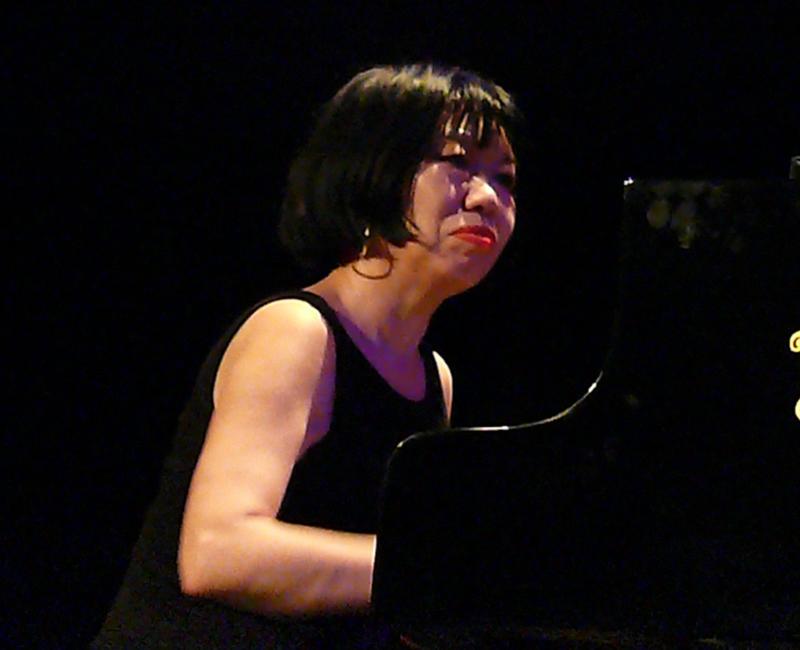 Takase's playful approach frequently involved delving under the bonnet, drawing on the contents of her bag of tricks to manipulate the piano strings, producing odd tonalities and gamelan like sonorities. At one point her scrapings were the cue for Edwards' rasping textures by sawing strings and body of bass simultaneously. Levin malleted a hand drum placed on top of his tom tom to produce a fantastic trio of clattering abandon showing awareness and invention. Later the Japanese's gentle introduction to another piece was spiced by bouncing ping pong balls on strings, creating a random burry dissonance. As she hit the affected keys balls were occasionally visible leaping into the air, adding a theatrical dimension to the musical.

Edwards played as if his life depended on it, putting in immense effort. In another percussive passage the bassist plucked with one leg half raised and his knee pressed against the body of the bass to modify its tone. His bowing was also exceptional, whether droning or mirroring swipes on the piano strings with high pitched vocalized creaks. Levin was a study in controlled power, answering Takase's keyboard crashes with a fusillade of his own, belaying a steamrolling locomotive rhythm or contributing cymbal coloration. Such an assertive opening strand threw down the gauntlet to Mujician which left the audience wondering how they would respond.

It took a good 15-minute for the Vortex Steinway to be retuned in the interval before the Mujician set. Once it was, the answer to the challenge was not long in coming. A single 50-minute piece ensued, conjured out of thin air, free flowing, kaleidoscopic, like clouds changing shapes, full of so many quicksilver changes that it defied description. Only six albums have surfaced during their two plus decades of life, with Colours Fulfilled (Cuneiform, 1998) and There's No Going Back Now (Cuneiform, 2006) figuring among the cream, and most accurately representing how they sounded tonight. Happily a recording session was scheduled for both bands midway through this tour, which should swell their slender discographies with a closer approximation of current status.

Levin launched tonight's journey with an annunciatory crash of his drums, before Tippett brushed the chimes hanging from his piano, Rogers shimmered and Dunmall unfurled lyrical tenor saxophone figures for a low key four way start. But if anyone thought that this was going to be a meditation on understatement then they were soon proven very wrong. Rogers picked up one of Tippett's cyclical constructions as the basis for a vamp, which Levin immediately latched onto. Dunmall weighed in with slurred tenor runs, but also some gritty paraphrases of the riff as the intensity increased. But illustrative of the turn-on-a- 5p piece (being the local equivalent of the proverbial dime) ethos, it suddenly disappeared with everyone stopping as one, evaporating when the expectation would have been for more frenetic oratory, leaving just Rogers to deliver a dexterous and exuberant bowed bass solo. 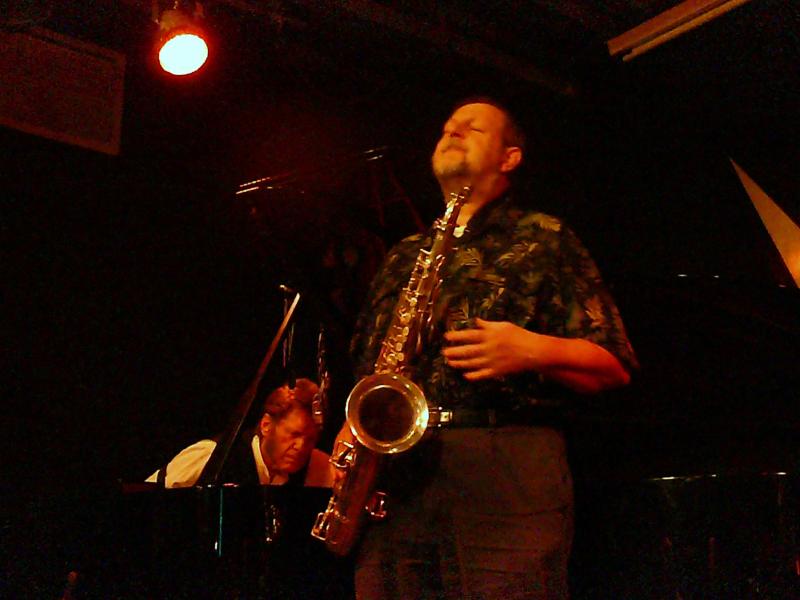 Such astonishing responsiveness bespoke the years of working in each other's company and familiarity with the choices each might make—when to play and when not to, when to echo/blend, when to contrast/ignore—and how quickly. One of the traits which distinguished Mujician from other improvising ensembles was the dizzying speed with which ideas were generated, explored, and discarded in favor of further innovation. Like the very best (Trio X spring to mind) the impetus shifted around the bandstand so that direction could emanate from any quarter.

As a result, the group also broke down into almost every available subsets during the evening. Levin spent as much time sitting out as anyone else so there was no sense of a rhythm section that accompanied a front line throughout. Though of course they did slip into those roles on occasion and sounded very comfortable in them too, with a surge of recognition as a classic jazz quartet took form before our very ears. Many idioms were touched on, but they were framed in an ongoing narrative where melodic fragments jostled with atonal elements and timbral exploration. Even though the syntax was closest to jazz, there were strands of folk, classical, and improv braided within it. 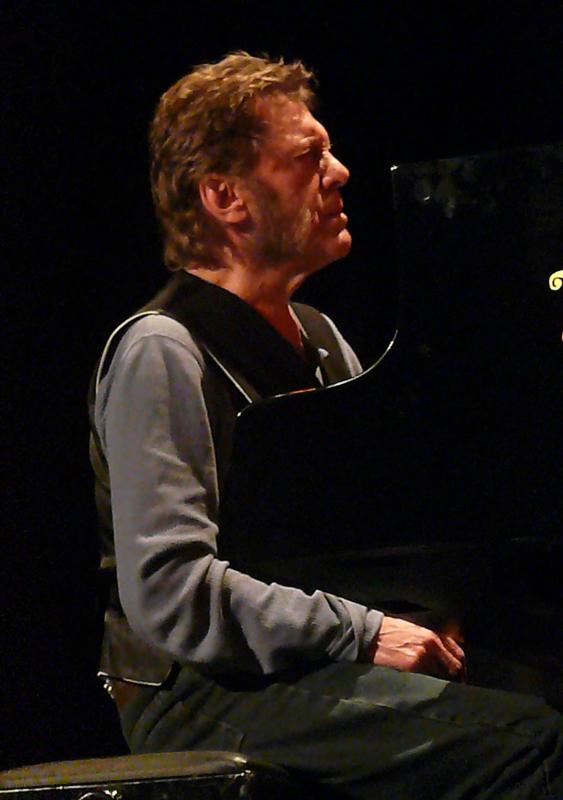 It was a special delight to hear Tippett in this setting: one with greater bite than the wonderful duet with his wife—Couple In Spirit—which trades more in the intimate and ethereal. Tippett demonstrated a predilection for repeating patterns, as often with a tinge of classicism or romanticism, as with a jazz inflection. Indeed that was one of the things which gave Mujician its distinctive identity. Another also stemmed from Tippett: that is his manipulations and alterations of the piano's mechanism by placing a variety of objects on the strings. It was apparent throughout that this was a considered rather than haphazard process. At times Tippett hurried to relocate his woodblocks from one part of the piano to another as he imagined a particular sound which would fit with where the band were heading. His preparations bore strange fruit. A voice-like edge generated by striking certain keys was juxtaposed with the fuller unaffected keys leading to a demented harpsichord clatter preceding a solo of rippling ominous harmonics to which the prepared section of the keyboard added a dissonant contrast.

Another singular aspect of Mujician's character derived from Rogers' custom-made 7 string bass, which extends his range higher than a conventional bass. Designed by the bassist himself his unique instrument also includes 14 additional strings meshed closer to the body of the bass which add extra resonance to his armory. All this would count for naught were Rogers not one of the most accomplished players on whatever sort of bull fiddle he played. Ample evidence was on offer from his resonant melodic phrases, to the muscular vamps he originated or echoed from Tippett. He also had four different bows at his disposal, the most unusual having a block of polystyrene wedged through it, which when picked bestowed a strikingly high nasal tone.

Dunmall was the perfect match for Tippett's free ranging all inclusivity, as equally at home with folk influenced plainsong as with Coltrane-inspired wailing, and moved between them with ease. But there was an incendiary edge to his playing this evening so that even his jazzier runs on tenor saxophone tended to culminate in impassioned foghorn blurts and distorted growls.

Then there was the birthday boy himself (although the drummer's actual birthday was earlier in the year, he joked that it seemed like his birthday every night on this tour due to the well-wishers congratulating him). Levin married crispness with frenzy, whether easing into a driving jazz groove or rumbling in polyrhythmic combustion. Even though he was the evening's featured performer, the drummer was judicious in choosing when to play, regularly sitting ears cocked intently before selecting his moment to fan the flames.

Two passages among the many that stood out were duets involving Tippett. First with Dunmall, he worked inside the piano, rubbing on piano strings as the reedman breathed a recurring soprano sax figure, before both became first mercurially tuneful then clashingly abstract. Later as Rogers' bass, soared in the cello register and beyond, the pianist shadowed him with skittering metallic attenuations of the piano's reverberations derived from his interventions on the piano strings. Tippett was at his most animated—a frantic clink clank cast against Rogers' flying bow delivering a tour de force of arco magic. Overall there was alchemy in the air, with sound transmuted into gold wherever you listened. Mujicians indeed.