Maximize your visibility at All About Jazz by upgrading your musician page from standard to premium. With it, you'll receive All About Jazz home page exposure, a highly stylized / ad-free musician page with bonus features and benefits, an ad, plus you control where you sell your music and so much more.
Learn More
839 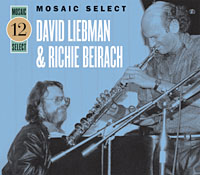 It's not often that one hears of musical relationships that last as long as twenty years, but saxophonist Dave Liebman and pianist Richie Beirach have shared a musical friendship that spanned a number of ensembles and contexts; sometimes, as in the case of their groundbreaking group Lookout Farm, they adapted to current trends, but they never followed them without injecting their own personalities.

While there are commercial recordings available as documentation of their work together, including the 1974 ECM recording Lookout Farm , the 1976 duo recording Forgotten Fantasies and the 1989 recording of their group Quest, Of One Mind , most of these recordings have either never been released on CD or are sadly out of print. Additionally there has never been the opportunity for a broader audience to experience what these groups sounded like live, where the magic really happened. Thankfully, courtesy of Dave Liebman and Mosaic Records, that oversight has been corrected. Mosaic Select: Liebman & Beirach , featuring live recordings of Lookout Farm, Quest and the two in an intimate duet setting, finally provides an opportunity to assess these artists in a context where they are allowed to stretch out to the fullest. While the recording quality is a bit inconsistent the performances compensate, making this an exciting and revealing document of two musicians who clearly lived in each others' stylistic pockets.

Lookout Farm, while garnering some notoriety at the time, never managed to acquire the same audience that was listening to other fusion groups of the time, including Mahavishnu Orchestra, Return to Forever and Headhunters. The likely reason for this is that, while everyone seemed to be melding rock and funk elements to jazz, most groups' emphasis was on the rock and funk side. Lookout Farm was, first and foremost, a jazz band. They swung hard; they explored the post-Coltrane harmonic language. To be sure, they also exploited the funk, Indian and 20th Century classical elements that Liebman had been exposed to as a member of Miles Davis' groups for the recordings On The Corner and Get Up With It , but more than any other fusion band of the time, they remained clearly associated with a looser improvisational framework. And this association was all the more evident in their live work where, pared down to a quintet featuring Liebman, Beirach, bassist Frank Tusa, drummer Jeff Williams and percussionist Todd Barkan, they avoided the density of their studio recordings, in particular the ECM date.

Disc One is taken from a particularly inspired Lookout Farm performance from the Keystone Korner in San Francisco in '76. Eschewing the compositional complexities of groups like Return to Forever and going, instead, for pieces that more closely mirrored the traditional AABA format, these tracks highlight a group that, with a few years of playing under their belt, had reached a remarkable level of empathy. Beirach, always a listening accompanist, is especially in tune with Liebman's chromaticism and modality. While some critics have asserted that switching to electric piano resulted in a loss of a performer's individuality, that electric instrument lent a somewhat samey sound, Beirach assures that this is clearly not the case. Whether playing Fender Rhodes on the funk-based, irregular-metered "The Iguana's Ritual," or on acoustic piano for the tender ballad, "Mitsuku," Beirach's lyrical and richly textured harmonic personality rings through loud and clear.

One of the more interesting tracks in this programme of original compositions is their take on Dizzy Gillespie's "A Night in Tunisia," which deconstructs the rhythm section into a 5/4 vamp over which Liebman fragments the popular theme. Replete with a slightly funkified samba feel, this track goes a long way to demonstrating the difference between Lookout Farm and other fusion bands. By taking classic material and completely reinventing it they show their reverence for their roots while, at the same time, providing a wholly original viewpoint. Special mention should be made of Williams, who has remained curiously under the radar in a thirty-year career, and provides a powerful polyrhythmic push that fits perfectly with the pedal-to-the-metal intensity of this band. And as electric as the proceedings are, Williams and Tusa never lose site of the swing; witness their hard-hitting post-bop approach to "Lookout Farm," burning underneath Liebman's Coltrane-like sheets of sound.

Throughout the set, anchored by an adventurous rhythm section, Liebman and Beirach assert strong musical personalities, already remarkably well-formed for such young players. While Liebman has always been a strong tenor player, it is his soprano work that ultimately elevated him to a level of prominence. Often considered a secondary instrument, Liebman makes a strong case for the soprano as a leading horn with solos like that found on "Fireflies," a funk-based composition that explores broad territory while, at the same time, being completely representative of the time.

Disc Two, culled from US and German dates in '76 and '90, is perhaps the most revealing disk, as it shows the two in duet settings fifteen years apart, and the growth is palpable. One of the reasons Liebman and Beirach work so well in a duo is that they are, to some extent, an exercise in contrasts; Beirach the abstract impressionist, who implies much; Liebman the abstract expressionist who tells it all. That's not to say Liebman overplays, far from it; but his intentions are always crystal clear, whereas Beirach often leaves something to the imagination.

"Leaving," from the '76 show at Keystone Korner, is a Beirach title that became something of a signature tune, recorded by over a dozen artists including Chet Baker, John Scofield and Jeremy Steig. Hauntingly romantic this is arguably the loosest recording available, with Beirach using it as a jumping-off point for a freer exploration of its inner workings. Liebman starts on saxophone but, following a solo section from Beirach, switches to flute, lending it a melancholy edge.

And what a difference fifteen years makes. The next track, "The Code's Secret Code/D.L." finds Liebman paying tribute to Beirach, whose nickname is "The Code," followed by Beirach's tribute to Liebman. What is immediately apparent in the intervening years is how Beirach's classical training has seeped into the music. Liebman, who by this time was playing soprano exclusively, demonstrates just how empathic their relationship had become, as the two pieces shift effortlessly and seamlessly between clearly structured sections and looser, freer sections where they manage to follow each other into deeper areas of abstraction.

But the final track, Liebman's "Invocation," which clocks in at a whopping twenty-eight minutes, is the most remarkable track on the second disk and, possibly, the collection; certainly it is the most outward-reaching. What is clearly evident is the incredible depth of interplay. At one point, about half-way through the track, it breaks down into a solo saxophone section; but Beirach occasionally interjects impressions, jagged chords and subtle shadings that show he is still listening deeply. Liebman and Beirach shift from ensemble passages to solo passages as the muse takes them; but always there is a broader communication that ties things together into a conceptual whole. While they integrate beautifully throughout the collection, it is in this intimate duo setting where the most magic occurs.

The most well-recorded of the box, Disc Three features Liebman and Beirach with Quest, their mid-'80s-to-early-'90s group that went through a number of personnel changes before settling into Ron McClure on bass and Billy Hart on drums. Unquestionably the freest material of the collection these tracks, recorded at shows in '88 and '91, also show Liebman and Beirach at their most intense.

Liebman writes that the stepping-off points for Quest were Coltrane's quartet with McCoy Tyner, and Miles Davis' mid-'60s quintet with Wayne Shorter, Herbie Hancock, Ron Carter and Tony Williams. The lineage to Coltrane is much clearer, although the quartet with Tyner never got this free. Still, modal workouts like Billy Hart's "Redemption" burn and swing hard, and feel like a logical evolution, with Beirach hammering out the fourths and Liebman effortlessly traversing territories inside and outside the established harmonies.

Even "Elm," another popular Beirach tune that was recorded on over a dozen albums, merely uses its memorable theme, which isn't established until well into the track, as a point of reference for McClure's muscular bass solo and, ultimately, a pedal-tone section where Liebman wails and screeches; still, while Liebman's playing is frenetic he never loses sight of the value of space, likely the strongest link to Miles' quintet work.

"The Hollow Men" is an exercise in textural playing, with the barest sketch of an idea providing a loose framework for the band. Moody and brooding, yet still with an underlying intensity, this is an example of how the group could shift responsibility; each member, at different points, defining the direction.

Finishing up with a version of Liebman's "Pablo's Story" brings the collection full circle, as this was a staple of Lookout Farm's repertoire and is also included on Disc One. But the difference in approach shows exactly how far Liebman and Beirach had come in the space of fifteen years. Demonstrating rapid-fire communication, the group is unpredictable, yet the end result has an inherent sense of construction. It's a shame that Quest never received the popular acclaim they deserved, possibly for being completely uncompromising and choosing a path that was constantly challenging; still, this was a top-notch group of improvising musicians, and the opportunity to hear a live set reveals a great many gems.

Liebman alludes, in the liner notes, to more unreleased live work that "will find its way to interested listeners." On the strength of the material contained in Mosaic Select: Liebman & Beirach one can only hope that the wait is short. As strong as their existing commercially recorded work is, this collection reveals that they are best heard in a live context. Credit to Mosaic Records for stepping outside their normal box of reissuing out of print material, this time releasing an entire collection of previously unheard work. While Mosaic typically targets a small and select audience with their limited edition releases, one can also hope that this will serve as motivation to cause some of Liebman and Beirach's unavailable studio work to see reissue.

Visit Mosaic Records and Dave Liebman on the web.