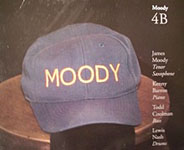 A stellar follow up to Moody 4A (IPO, 2009), saxophone icon James Moody presents the sequel Moody 4B, actually recorded the day after the first session with the same blue chip quartet. Legendary pianist Kenny Barron renowned bassist Todd Coolman and versatile drummer Lewis Nash all lend their collective musical energy for this second date. Much like the first album, 4B introduces a couple of original tunes mixed in with a select number of standards from the Great American Songbook and a few oft recorded classics.

Moody takes a ride on the train for his opener, Billy Strayhorn's "Take the A Train" to be exact, introduced by a few rag-time-like bars from Barron as the train leaves the station propelled by the electrical charge from Moody's tenor. The Kurt Weill/Ogden Nash standard "Speak Low" enjoys a non-traditional Latin jazz treatment providing just the spice to liven the melody a bit. Aside from the saxophonist's own wonderful phrasings, it's Barron and Nash who deliver the kicks on this one. "Polka Dots & Moonbeams" is a ballad piece not to be missed with Nash taking out the brushes as Moody lays down another soulful performance.

Cole Porter's "I Love You," a soft textured ballad, proves to be the charmer on this disc and a featured number for both Moody and Barron who play off each other and fashion the outstanding piece of the recording. Bassist Coolman contributes one fine chart with the bouncy "O.P. Update" in which of course, he takes center stage with tasteful bass work of his own. Barron's "Nikara's Song" is the only other original piece on the album and it offers the pianist space to play his magic.

The set winds up with two familiar classics lending new reads to Benny Golson's "Along Came Betty" and the Gershwin brothers immortal "But Not For Me." Unfortunately there may not be a "4C" waiting in the wings though a trilogy of this kind of music is just the shot in the arm that the jazz world could use more of. Nevertheless, if we must settle for a "sequel" only, then Moody 4B is as good as it gets. At 85 years young, James Moody keeps churning out some of the best straight ahead jazz in the business.