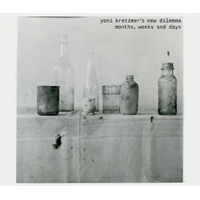 Tenor saxophonist Yoni Kretzmer is not one to rest on his laurels or pursue straight and narrow musical paths as his discography consists of various ensemble configurations and objectives. With this hybrid chamber jazz and improvisation-based sextet, the musicians interpret the leader's compositions, structures and outlines via improvisational means.

The ensemble delves into the experimental scheme of things, although these pieces do project semi-structured vibes, topped with gradual buildups, streaming strings passages and elongated unison choruses. Along with expand and contract processes there are often multiple dialogues taking place at various intervals. Kretzmer's upper-register vibrato techniques and gruff exhortations add a dramatic and emotive edge, generating a sensibility that danger is in the air. It's a theme that may or may not parallel the compositional titles, alluding to random days, weeks and years.

The septet offers a sense of adventure on this 2-CD set. And from a free or experimental standpoint, many of the passages and movements provide tangible thematic statements no matter how fleeting or concrete they may appear to be. Nonetheless, Kretzmer is an electrifying performer who invokes the element of surprise on a recurring basis.