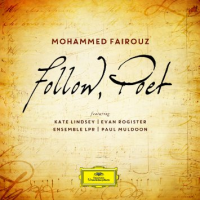 The sacred German record label, Deutsche Grammophon, is thinking outside the box. Deep in the traditional classical fare, DG is certainly a discographic force to reckon with. But one can only do so much with Bach, Beethoven and Brahms. Universal Music Classics president and CEO Elizabeth Sobal conceived the idea of a marriage between words and music, which, to most of us, is singing. She envisioned more, the marriage of music, poetry, lyricism and programming into a whole larger than its parts. The label christened this series Return to Language.

This project has a decidedly Irish flavor to it. Two snippets of John F. Kennedy, giving and address while receiving an honorary degree from Amherst College is dispersed between pieces. Kennedy first touches on the importance of poetry and then of writers. Then a cascade of Anglo-Irish: Seamus Heaney, William Butler Yeats, W.H. Auden, and Paul Muldoon make appearances a strategically planned times.

The music portion of this project is provided by the young composer Mohammed Fairouz. DG boasts that he is the youngest composer to have an entire album of his compositions record for the label. His compositions: a song cycle based on the Seamus Heaney poem "Audenesque" and a ballet inspired by the life and death of Egypt's late president and peacemaker, Anwar Sadat, provide the musical anchor for the project. "Audenesque is sung by the capable mezzo-soprano Kate Lindsey. It is a quadripartite dedicated to the memory William Butler Yeats by the composer using Nobel Laurete Seamus Heaney's text. Following the song cycle, Irish poet Paul Muldoon recites the Heaney poem to great effect.

Fairouz's five-part ballet on the life Sadat is both tuneful and reverent. The composer's work crackles with originality and humanity. Fairouz uses the marimba liberally, giving his piece a hue of phantasm. Listening to this recalls Copland's "Rodeo" regarding the disparate structures of the individual movements. Muldoon returns to recite Auden's "In Memory of W.B. Yeats, tying this project up nicely. This is an ambitious project that is successful for the most part. This is not passive listening, it requires an engaged listener willing to learn something new.