By JEFF DAYTON-JOHNSON
October 29, 2006
Sign in to view read count 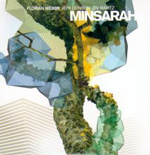 It's nice to see a pianist also credited with kalimba, loops and rum bottle, as Florian Weber is on this disc. That sounds a little wilder than it is; this is really a piano trio date. Nevertheless, the slightly odd instrumentation on the margins is indicative of a fanciful energy that suffuses Minsarah, this disc from a trio filled out by bassist Jeff Denson and drummer Ziv Ravitz.

The rum bottle—as a tuned percussion instrument—appears to garnish the playful intro to "Child's Play," before the track settles into a funk groove. On that selection, this outfit manages to sound a bit like an acoustic piano trio version of Herbie Hancock's group on Sextant (CBS, 1973), which is another indication of the eccentric charm mixed with musical intelligence that distinguishes this record. ("Child's Play" even sounds like a Herbie Hancock song title.)

The Minsarah trio shares the compositional duties broadly, each contributing a number of tunes. Collectively, the compositions evince a penchant for natural, indeed physical, phenomena—water, clouds, dried leaves, mist—and the song titles come in a variety of languages: English, French and Spanish (to which one can add the Hebrew of the record's title). Witness the surging ebb and flow of "Like Water" or the kalimba's evocation of autumn leaves in the wind in "Hojas Marchitas." To these natural and linguistic diversities, the musicians add stylistic diversity, ranging from the funk of "Child's Play" to the classical vocabulary employed on "Shift."

Like the phenomena they seek to depict, these songs exhibit a lot of dynamic range, quickly jumping from loud to soft and frenetic to meditative. Along these lines, the record's last cut is called "Lunatic," and reflects not madness but the sense of the French word lunatique, one of whose meanings is "changing"—like the phases of the moon.

If some pianists play with pointillist precision and others favor a light impressionist touch, then Weber's lines are like those of an expressionist painter: forthright, dark, maybe looking ragged up close, but with a fine sense of composition when you step back. Maybe a little like Thelonious Monk or Don Pullen, except that he doesn't sound specifically like either of them. The sound will sit well with admirers of Brad Mehldau, with whom Weber shares the same heavy touch on the keys, and the same omnivorous musical appetite.

While Weber is out front, the others provide consistently strong support, venturing into the spotlight at times: Denson has a nice feature on "If I Only Had An Answer," Ravitz on "Hojas Marchitas."

Visit Minsarah on the web.

Through the Mist; Close to the End; Like Water; Shift; New World; E.S.P.; Nuage; Hojas Marchitas; Child's Play; If I Only Had An Answer; Lunatic.