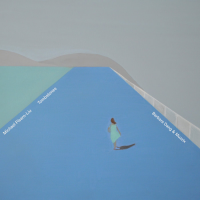 Here we have a recording with a history, one which needs to be told in order to set it in context. "Tombstones" is the collective name of twenty songs composed by Michael Pisaro between 2006 and 2010 (before his marriage to Cherlyn Hsing-Hsin Liu led to his surname change to Pisaro-Liu). In 2012, eleven of those songs were released on a collectable limited-edition LP by the Human Ear Music (HEM) label, followed in 2013 by the same recordings on an HEM CD, both being credited to Pisaro. On that album, recorded in San Francisco, in 2010, the songs were performed by a nine-member ensemble of whom six were credited with vocals or spoken word recitation, Pisaro himself being one of the latter.

At the time of those releases, it was reported that the "Tombstones" songs were inspired by fragments of songs, including some by Lennon, McCartney, Dylan, Jay-Z and Robert Johnson; some commentators referred to Tombstones as Pisaro's pop album, one even drawing a comparison with David Bowie's Pin Ups> (RCA, 1973). Despite such comments, repeated listening to the HEM releases revealed no obvious lyrics or melodic fragments that were attributable to the named sources; Pisaro may have been inspired by them but he had not "borrowed" from them. And, although a Pisaro pop album may have sounded fanciful, "Tombstones" sounded right at home in his canon.

Fast forward to June 2020 at Theatre Le Colombier, a performance space in Les Cabannes, north-west of Albi in southern France, where the Lille-based pianist Barbara Dang and six other members of the Muzzix collective recorded the pieces, with Muzzix member Maryline Pruvost as the main vocalist. Yes, that is correct; Dang & Muzzix recorded exactly the same eleven songs (in exactly the same running order) as were released in 2012, rather than attempting any of the remaining nine. Maybe they decided to leave those nine for a follow-up album? Although playing the same compositions, Muzzix do not copy the HEM versions. In particular, the decision to have just one lead vocalist was a good one as it gives this album a rather more unified feel than its predecessor. Pruvost's voice is pure and true, at times calling to mind those of her fellow Elsewhere labelmates The Giving Shapes. Pruvost's voice is accompanied throughout by Dang's piano, with other instruments and voices being used sparingly as punctuation and coloration; sometimes this leads to pregnant silent pauses—very Wandelweiser. As they are sung (or, in some cases, most notably "I didn't say anything," recited) these compositions qualify as songs, but they have none of the hallmarks of pop songs—verses, choruses, middle-eights et cetera... Having accepted that, as a whole this album makes compellingly beautiful listening in its own right.

Pisaro-Liu afficionados will find plenty here to satisfy their addiction. Curious newcomers can begin here, knowing that it will probably make them addicts too. On this evidence, all will hope that Dang & Muzzix get around to tackling the remaining nine "Tombstones" sometime soon.