BY DEREK TAYLOR
August 10, 2005
Sign in to view read count
What's that old adage... when it rains, it pours? With metaphorical water this refreshing we should all be thankful. Seattle-based bassist Michael Bisio takes part in a pair of projects that add substantially to his existing folio. The releases also mark a recording renascence for Fefer who's kept a relatively low profile since his last date for CIMP. He can also be heard on a recent tandem of discs for the Boxholder label in the company of Bobby Few. Taped over two days in the dead of winter the first date focuses on a Bisio-led quartet while the second shaves focus down to an intimate match-up with Fefer, two sessions with two decidedly different vibes. 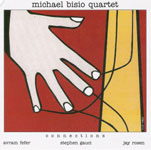 On Connections Bisio stocks the remaining slots in the quartet with two other exceptional talents: one well-known to most creative music listeners, the other a new face. CIMP regular Jay Rosen handles drums and saxophonist Stephen Gauci completes the frontline. Fefer and Gauci present an interesting study in contrasts. Fefer is often the extrovert, gregariously switching between reeds and frequently favoring a muscular and linear attack. Gauci exhibits a more oblique approach, coaxing a broad range of timbral effects from his tenor and sculpting phrases with a weird inner logic that subverts predictability.

Bob Rusch's notes to Gauci's recent disc on Cadence Jazz cite a serious childhood hearing ailment as a defining factor in his evolution on the horn. While he sometimes seems to operating off his own compass, Gauci's contributions consistently jibe within the larger context of the group. His approach is a bit puzzling at first, but once the ears acclimatize his concave eccentricities yield plenty of engrossing content. His deep interest in atypical textures and tones parallels Bisio's and the pair draw a colorful palette of sounds from their respective implements.

In addition to highlighting the individual players strengths, the program also places Bisio's laudable compositional skills in a position of prominence. On "Blue State a gradual ensemble beginning segues into a duet between Fefer's honking then fluttering soprano and Bisio's febrile pizzicato. Rosen adds rustling accents with brushes. Gauci's breathy, trill-prone tenor takes the lead and Bisio switches to a plump walking line and Rosen back to peripatetic sticks for a rambunctious finish.

Arco harmonics and palpitating plucks introduce "Basic Deconstruction bracketed by gongs and bells and the entrance of Fefer's chalumeau clarinet and Rosen's brushes. Gauci blows gauzy trills and Fefer circles him with mercurial tonal corkscrews as the tempo increases. Gauci initially refuses to be hurried by the bustling activity of his colleagues, but eventually acquiesces to the pleasures of the accelerated romp. Rosen summons one of his martial Elvin-indebted salvos and the mood suddenly turns tribal with Bisio carving a kora-sounding rhythm in tandem with cymbals, Fefer's tootling flute and Gauchi's pinched overtones. Calamity strikes abruptly as the bridge of Bisio's bass splinters and collapses under the pressure of his pummeling attack.

Some jury rigging by the bassist and members of the Rusch family rights the damage and the quartet is miraculously soon back on its feet. After a deceptively low-key opening, the center section of "History of a Mystery explodes in a garrulous dizzying fracas between bass clarinet and tenor backed by Bisio's busy thrumming and Rosen's spacious clamor. The band switches to loose tone poem territory for the middle third. The reeds overlap loquaciously over a liquid whitecap rhythm with Fefer voicing a melancholy Old World motif on clarinet as Gauci gesticulates with a spate of wild overblowing beside him. The scrubbing Emory board hum of Bisio's arco bass signals a final summation; his bowing so vigorous that the earlier injuries to instrument seem but an afterthought.

The swinging bop of "Swa Swu Swi scored for bouncing alto and tenor finds the horns inhabiting nearly the same register range. Bisio lays down a juicy walking line and Rosen syncopates with sly sagacity on brushes and hi-hat, the bulk of the piece deferring to their responsive and playful interplay. "Zephyr opens up another chamber style confab between clarinet and tenor with commentary from Bisio and Rosen. Coltrane's "Drum Thing carries the rhythm colloquy even further as the horns sit out, leaving bass and drums to an intimate six-minute duet. The disc closes with two cuts for clarinet and bass that preface duo subsequent duo session with Fefer and Bisio: the playful "Sometimes I Feel and another version of "Zephyr cleverly pared down for two players instead of four.

The natural rapport between Fefer and Bisio so audible at the core of the quartet date receives even greater scrutiny on a suite of duets released as Painting Breath, Stoking Fire. Fefer limits his palette to tenor, bass clarinet and flute while Bisio wields the same bass hobbled in the previous day's catastrophe. The cobbled bridge holds despite his bold decision not to temper his attack with a delicate touch. That sort of fearless go-for-broke tenacity is also reflected in the album's title, a phrase that conjures immediate connotations of energy music and the emancipatory improvisational spirit these two are operating from. Contrary to these roots, the results often mellow, draped in a shared contemplative cast that favors more solo space than interplay.

This time Fefer provides the compositional grist for the six tracks that comprise the suite, but his structures are open-ended and routinely encompass ample room for extemporaneous expression. Bisio in particular shines in the pared down surroundings. His tonal and harmonic ingenuity gives rise to another startling array of patterns and shapes starting with the pinging mbira sounds that accompany Fefer's flute on "Ancestral Voices. "BC Reverie/Inner Child revolves around a perambulating ostinato line. The pair pause and detour frequently into alternating solo segments for thrumming and bowed bass and throaty bass clarinet occupying the expanse of a quarter hour.

"Love (Keepin' On) couples with "Rio Largo y Sinuoso as a forum for first solo tenor then clarinet as Bisio snaps and plucks an underlying current of undulating rhythmic responses peppered with melodic asides. His closing statement is a marvel of digital agility and pizzicato acuity. The sparsity of the setting and further leanings toward individual expression contribute to the feeling of being a fly on the wall of a woodshed where two players are honing and stretching their chops. The results sometimes require patience in following their circuitous and ruminative structures, but the rewards attentive ears are manifold. Another loosely-tethered medley, the fourth track combines source material from four compositions into an excursion where the segues and shifts are both organic and seemingly off-the-cuff. Once again, the communication unfolds in a laidback, but never slipshod manner.

The recital caps with a solo tenor foray by Fefer reprising the melodic kernel of Love (Keepin' On). He imbues the motif with a sense of robust optimism, one brightly reflected in the crackling fire that serves as periodic ambient commentary on the cuts. Though the conversation is a bit prolix and overly discursive in spots, this thoughtful conclave for two improvisationally-oriented minds still packs in plenty of interest. Bisio and Fefer don't get together as much as they would like thanks mainly to geographical distances. This set and its quartet companion make a strong case for funding to facilitate their future collaborations. Musical partnerships this profound and productive simply shouldn't be allowed to atrophy or expire.

Visit Michael Bisio and Avram Fefer on the web.