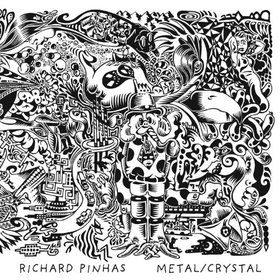 Think of sheaths of titanium splintering across a room at the speed of light, and a moveable wall of sound that poses a daunting proposition. These are components that signal the vivid imagery, supplied by pioneering French progressive space-rock guitarist and synthesist Richard Pinhas on a set that is based on mental disorder symptoms. Along with guests and revered Japanese noise-shaping artist and author Merzbow (Masami Akita), the program casts a semi-structured outline, infiltrated by variable electrical impulses amid an incisive journey into the mind's eye.

Pinhas shapes a course erected on bustling backbeats, guerrilla bass vamps, and jaunts to the darkest corners of the psyche. At times the artist exercises a journey, swarming with doomsday-like burnouts and cyclonic voids. And his distortion-laced guitar voicings heighten the tension that often complements the album's ethereal overtones, or experimental sound-sculpting mechanisms, largely evident on CD2.

On "Depression," Merzbow spins his abstract electronics magic atop pulsating grooves and Antoine Paganotti's punishing rhythms around the guitarist's single note ostinato, that serves as an indexed reference point. Here, Pinhas imparts the gravity of a depressed mental state, where a chemical imbalance of the brain is parlayed into digitized musical responses.

In a sense, Pinhas' framework of using mental disorders as an underscore for these captivating and sometimes, gut-wrenching thematic maneuvers generate a vibrant depiction of human physiology. But from a soundscape perspective, Metal/Crystal looms as one of the loudest albums of his extensive discography. Musically speaking, it's a mind-blowing panorama that is not docile or for the faint of heart.