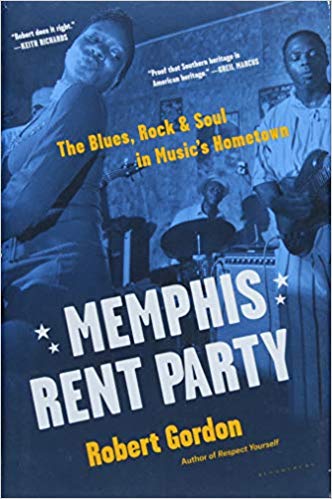 One becomes part of a place when one takes that place for granted.

I spent the better part of the 1980s in Oxford, Mississippi, attending graduate school. During that time, I practiced pharmacy in Charleston, the co-county seat of Tallahatchie County, along with Tutwiler. All of these locals are infused with significance. I lived in Clarksdale for a while, where I also practiced pharmacy, just down the road from the Riverside Hotel that, at one time, housed the likes of Sonny Boy Williamson II, Ike Turner, and Robert Nighthawk, and was originally the site of the G. T. Thomas Afro-American Hospital, where Bessie Smith died in 1937. All of these places are sacred music grounds that I walked among frequently. And learned to take for granted.

So, while I was avoiding my graduate work, opaquely dreaming of the blues, and accomplishing exactly nothing -Memphian Robert Gordon was tightening his focus on his hometown and becoming its greatest apologist. It Come From Memphis (Faber & Faber, 1995) was his first book, which could be considered a convenient companion piece to Memphis Rent Party: The Blues, Rock & Soul in Music's Hometown Gordon's present collection of published and unpublished articles, all centering on Gordon's (and all of our own) sacred Memphis. I consider Gordon the regional Peter Guralnick and a staunch promoter of what should have been the proper home of the Rock and Roll Hall of Fame.

On the subject of Memphis, Gordon pretty well sums the place up in his opening paragraph from his selection, "Jeff Buckley" as such:

"Memphis allows you great freedom. On the street, you don't encounter stars of today's charts, nor a world of less-heavenly bodies —agents and publicists and managers. There's no mill expecting fresh grist, nor even is there much of a culture-seeking audience; there's better towns for higher culture. You work at your own pace, you develop in public as much as you like, then you take it elsewhere to sell —either in a van with a guitar, or through one of the cities of industry, or from you bedroom on the internet. We are a hole in the wall —some call it a city —for artists, so having the factory two hundred miles away in Nashville seems just about perfect to me.."

That is pretty much Memphis, though the city has been much more and much less. Gordon focuses on the local, those characters great and small who make the Memphis the unique and highly troubled place it is. Troubled it may be, but no one seems to mind that much. Gordon's pieces are like individual diamond prisms through which the light of his insightful reportage passes through. Each is a microsom unto itself but often overlapping. Alex Chilton and Jim Dickinson loom very large, as they should, they represent the fertile, near out-of-control, creativity that has always been a part of that city.

The book is comprised of twenty essays, published and unpublished, for which Gordon provides brief, informative (and often entertaining) introductions. The essays focus on a single individual and that individual's place in music history with Memphis as the backdrop. This is a book full of colorful characters that only the south could produce or convert. While every piece is illuminating, sad, funny, and profound in its way, I will cite two, giving examples of what to expect.

"Jim Dickinson: On The Edge" presents that musical force of nature as the wise-cracking Godfather of Memphis music. Gordon writes,

This is what Jim Dickinson sounds like when he waxes poetic. There is a completely different storyteller Jim Dickinson, who doesn't need to be a storyteller, because what he tells actually happened...to and with him. On producing Dan Penn's never released project, Emmet the Singing Ranger Live in the Woods...

..."The best thing I did on that session was a song called "Tiny Hineys and Hogs" about Harley riders. I had two Harleys in the studie, one of them playing rhythm —it was held open —the other one was playing the beat. The guy was retarding the spark to get it on the beat and then giving it gas to keep it from dying. It was shooting four feet of blue flame. It was unbelievable. The whole studio filled with carbon monoxide.

Knox Phillips, he's Sam's son and also a producer, his friend was visiting —Mike Post, who does TV theme songs [Law & Order, Law & Order: SVU, The A- Team, NYPD Blue, Renegade, The Rockford Files, L.A. Law, Quantum Leap, Magnum, P.I., and Hill Street Blues]. I was wearing this hat with a feather that hung down into beard. Mike Post was afraid of my hat, and when he saw the motorcycles, he was terrified, thought he was in the presence of some kind of insanity. The fucking motorcycle takes a solo; it sounds like a saxophone at one point. Everybody is saying, the motorcycle is right on the beat!" Of course, everybody is playing with the motorcycle, that's what's really happening. Real good session.."

And that was a restrained Jim Dickinson.

"Jerry McGill: Very Extremely Dangerous" illuminates like a martyred visage, a life lived in the light of an electrical storm. Jerry McGill cut two songs for Sun Records in 1959: "Lovestruck" and "I Wanna Make Sweet Love." During the next two decades, McGill managed Waylon Jennings's road show, working as "Curtis Buck" and co- writing songs including "Waymore's Blues." He was on the lam for federal charges.

Those federal charges caught up with him in late 1970s, and McGill had largely disappeared behind a series of criminal charges including illegal weapons possession and attempted murder. He changed his name several times, but reappeared in 2009 to star in Gordon's documentary "Very Extremely Dangerous" described by Gordon as:

"For me, finding McGill was a reminder to be careful what you wished for. He remained a part of my life until he died, alway alerting me in subtle way that he could find me if he wanted to. There were signs I should have seen, like the fact that when he finally resurfaced in 2010, Mary Lindsey Dickinson did not want him to know which state she and Jim lived. There were very unpleasant days when making Very Extremely Dangerous, when vérité footage of Jerry's ugliness was overwhelming. For this movie in which we followed him for about ten weeks —fresh out of prison, newly connected with his old girlfriend, and suddenly diagnosed with lung cancer ---we had to make Jerry's character at least somewhat palatable, and we'd enter the edit room saying, Time to chisel off some more hate. But there were also some experiences shooting it that were so full of humanity my heart could barely take it.

But, in the end, Memphis Rent Party is a collection of love letters from Robert Gordon to and about the place, his place, Memphis. His best writing is saved for the collection's conclusion, a section he called, "Afterword: Stuck Inside the Memphis Blues Again" where he summons the ghosts of mentioned throughout the pieces, all about a very mythically real place:

"Memphis is not about perfection but about the differences, the flaws. It's the kinks that mark beauty and define us, not the lack of them. How remarkable to create something unlike what anyone else can, that even artists can't repeat...

"Perfect imperfection" is how Sam [Phillips] described his goal, and that's pretty much the Memphis approach to art.

To me, Memphis is a verb. It means, To seek and embrace what's different. As far back as the 1960s, the Rolling Stones were encouraging Americans to try it. Stones bassist Bill Wyman told me, "When we brought it to America, it was like new music to the white kids here. They'd say, 'Where can we get this music?' And it was just down the road there." He laughs, "We had to come across the ocean, you just have to go across the river and its there." Beyond the bright lights and the blue screen's glow, beneath the clamorous beckonings for your attention, and not just in Memphis but all over the world, a still, small voice sings.". 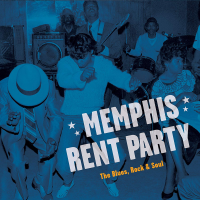 I received this nondescript CD, Memphis Rent Party: The Blues, Rock & Soul, before knowing it was associated with Gordon's book. I recognised it as an intensely regional travelogue and gave it a listen. What I heard was a Southern-fried, schizoform fever-wet dream spiraling off it meds. I heard a loping, dangerously unhinged collection of songs held together by the steel thread of the southern experience. Then I read the book, fashioned much in the same way as this disc and the two came together to make perfect sense...well, at least in the late Jim Dickinson's world.

Appropriately, the disc begins with the song it should have ended with, Jerry McGill covering Guy Clark's "Desperados Waiting for a Train." Of the man and the song, Gordon opins,

"The greats wanted to play alongside [McGill]. Mud Boy and the Neutrons in the 1970s sessions that Jim Dickinson Produced (featuring some of their best- ever performances, with Lee Baker's guitar on "Desperados Waiting on a Train" sounding strung with prison wire..."

There are many covers of this song, but McGill's may be the most staggering...and foretelling.

All of that said; music is for the living. The majority of the artists discussed in Memphis Rent Party are dead, save for one significant one, Tha Killah. And the only fitting way to finish reading this beautiful collection of love stories is listening to the rollicking and ribald performance of "Harbor Lights" on this companion CD:

The harbor lights of Venus
Shining through the breeze
That brings me back
To you my love...