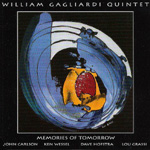 Saxophonist William Gagliardi writes songs with a free jazz posture and a hard bop conscience, a duality which sometimes leads to a kind of psychic split at the middle of a tune. There are various examples of this on Gagliardi's quintet release Memories of Tomorrow. The discourse and tonality between Gagliardi's tenor and John Carlson's trumpet on "Coup d'etat follies recalls Ornette Coleman and Don Cherry. Ken Wessel's almost subliminal guitar is the wheel's axle and Lou Grassi's relentless drumming brings to mind Elvin Jones' interplay with Coltrane.

"Let's Play has a cool vamp at the top following the tandem horn intro, Wessel's sparkling economy giving the horns extra elbow room. Gagliardi's vehement alto takes no prisoners as Carlson's trumpet spurs him on. The military march coda that ends the tune sounds forced, however, as if the band couldn't bear to release the song on its own recognizance.

Gagliardi's tenor and Carlson's trumpet dance with measured intensity on the title cut. "Cosmic Monster is an irresistible toe-tapper where the band shows its sense of humor by inserting a Latin melody in the midst of Grassi's percussive highlights and Gagliardi's elephantine blasts. Dave Hofstra's brooding pizzicato bass sets the mood for the spare but memorable "The Key to the Gates.

Grassi's open-the-damn-door drumming, Wessel's elfin guitar swirls and Gagliardi's unbridled alto define the funky "The Question Unanswered. Memories of Tomorrow is a feast for the ears, a sumptuous offering from the man known as Billy Gags.