You Hit the Spot by Ricky Alexander 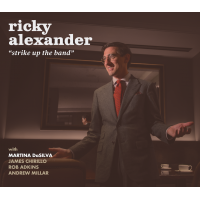 Ricky Alexander presents his debut album, "Strike Up The Band", as a celebration of classic swing music. With rising star vocalist Martina DaSilva and the legendary guitarist James Chirillo alongside, the band explores and brings new life to songs that were popular in their day but brushed aside by time. Recorded on eight vintage ribbon microphones, this album truly captures the warmth and honest sound of the golden era of jazz.