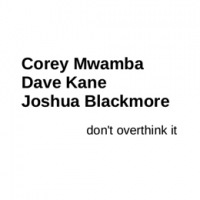 Hairy skit, so fierce. With a side order of rice. #dontoverthinkit

Ynglinga is the name of a saga written by Snorri Sturluson. As with most Northern European literature/histories, there's a great sense of place within the story. The music doesn't have a name really. When you download it, feel free to change the name of the track to something you like. Corey Mwamba | Dave Kane | Joshua Blackmore have made recordings of their music available on CD for four years. "don't overthink it" is the first one that hasn't been recorded in a live setting.