West Side Constitutional by Josh Brown 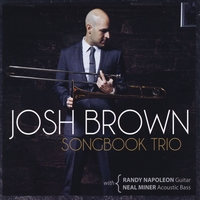 Has been a while since DOTD had a trombone in the spotlight (one of the sweetest you ever heard). Nice clean bass and guitar accompaniment/duets make for an unusual trio grouping with a tight, fresh sound. Did you ask where the drums were?

In planning Songbook Trio, Josh Brown was determined to assemble a collection of songs that he not only loved personally, but that would allow listeners to revisit a golden age of popular music in a fresh new light tone that was thrilling, yet full of intimacy and subtlety. Personnel