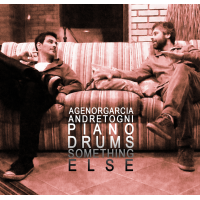 After 7 years without seeing each other, the two friends reencounter to try spontaneous ideas recorded in real-time. Their first experiment back in 2001, called "GIRAL" (never released), stood out as a standard for the technique, creativity, and experimentations employed in "Something Else". ​It was an experience of "creation in real-time", recorded "spontaneously" without rehearsal or editing at Andre Togni's studios. The single "WAVE" (Tom Jobim) is a sample of what the album is about.