Timing Is Everything by Gustavo Cortiñas

Punchy, polished virtuosity from Gustavo Cortiñas and company. If this was a UK post bop band, it might consist of Clark Tracey/Nigel Hitchcock/Guy Barker.

“Since photography's inception, the snapshot has lived a double life. On one hand it describes a disposable image, something of little value, something made casually. On the other hand, it describes a truth par excellence, fixing the world's fleeting details. The snapshot makes no mistakes; it transcribes the richness of a moment in time, sharpening the slights that sum up each ticking locus.” (Luke A. Fidler) Every composition on this record is a “snapshot”. It focuses on a particular experience in my life, capturing the feelings and character of that meaningful moment. The record itself is an auditory snapshot of the musicians who participated in its making, and of the musical and human experiences we shared on Feb. 28th and March 3rd 2013. Timing Is Everything is a reflection on the frustration that comes at times in which you find yourself unable to attain that which you really want, given that the circumstances surrounding the fact are simply not aligned in your favor. However, it is also a realization that when the timing is right and it is meant to be, good things will come. 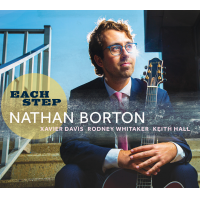