This Year's Fancies by Andrew Downing 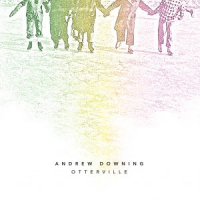 Otterville is Downing’s tenth release, named after a small town in the Southern Ontario tobacco belt that was once home to generations of Downings. The double album features instrumentalists from various musical communities, including Christine Bougie (Bahamas), Paul Mathew (Sarah Harmer, Hidden Cameras) and Michael Davidson (Hobson’s Choice), as well as an impressive list of stalwart Canadian jazz musicians. The compositions are simple and folky, but they revel in the colourfulness of the unique instrumentation and the subtle musical details of the arranging to create dreamy, nostalgic, other-worldly music, inspired by Billy Strayhorn, Kurt Weill, Bill Frisell, Jon Brion and Ry Cooder. Each piece secretly celebrates one of the great American songwriters and jazz composers of the early 20th century by stealing germs and motifs from old songs and refocusing them using Downing’s compositional lens, like Fall In Line’s veiled tribute to Gershwin’s Strike Up The Band, This Year’s Fancies’ nod to I’m Old Fashioned by Johnny Mercer and Jerome Kern, and Observatory’s inspiration from Dizzy Gillespie’s Con Alma. Included also is a reworking of Billy Strayhorn’s near-perfect classic Take The ‘A’ Train. A special, limited edition of the album also features a hardcover book of stories by Canadian poet, filmmaker and songwriter John Southworth, which also dismantles and refashions the disguised source music into prosaic vignettes.

CD 1: This Year's Fancies; Head Start; All Alone On the Mountain; I'm No Good Without You; Numbers You Know; A Pair Of Eyes; Family Portrait; Rhyme. CD 2: Fall In Line; Parade; Mooning About; Take The 'A' Train; Observatory; Wish; Leaving Me With A Memory.