The Deep by Jackson Hardaker 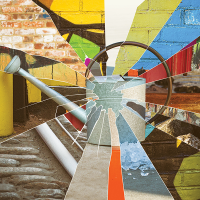 "The Deep," takes time to get to it (5min 30sec), followed by a nimble guitar feature.

Trombone heavy, original, modern/avant garde jazz. From the land of the long white cloud, via New York City. Watering Can consists entirely of compositions written by Jackson himself, and draws from a wide range of influences; from the sometimes sparse and always playful melodies of Steve Lacy, to the various stops along the artistic spectrum of Jackson Pollock and René Magritte, all the way to inanimate objects.