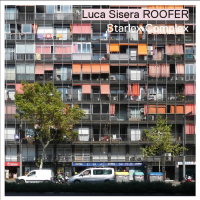 Free as in transcendent, light as in airlifted, simplex as in easy and engaging.

Creative Swiss bassist Luca Sisera is a musician considered one of the most versatile instrumentalists on the European scene. As an accomplished sideman, he playfully comes to grips with even the most demanding of jobs across the entire jazz genre, as well as interdisciplinary projects. In 2013, he founded ROOFER as his own quintet. Michael Jaeger (saxophone), Maurus Twerenbold (trombone), Yves Theiler (piano) and Michi Stulz (drums) are major musicians from the relatively young Swiss jazz scene. They handle the sometimes highly complex compositions very freely and thus realise their band leader's vision in a congenial way. "My vision is to create music where freedom, complexity and simplicity meet. Music that carries a strong collective spirit within it. We often keep the division of roles between accompanist and soloist completely open."