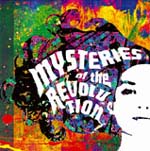 Psychedelica Electronica: Debut Album Release by Mysteries of the Revolution.

About Mysteries Of The Revolution