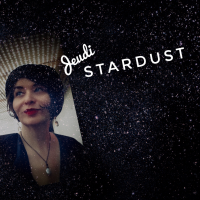 This beloved gem from the Great American Songbook has been recorded at least 2,300 times, yet Hoagy Bix Carmichael took a moment to reach out and tell Jeudi: "It was a treat to hear your take on the song". Have a listen to hear her version of his Dad's song. Jeudi's approach is a meandering, melodic soundtrack for revisiting paradise lost, where wistful memories dwell, heartfelt yearnings are indulged and souvenirs of meteoric passions shoot across the mindscape, leaving behind only Stardust, lingering love and melancholic hope.