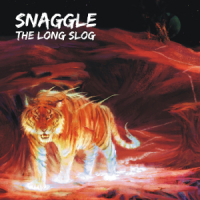 Snuggle with the Snaggle...

Based in Toronto, SNAGGLE, ­­ under the leadership of in-­demand 25 year old jazz pianist Nick Maclean, is a 6­-piece electric­-jazz-funk ensemble often described by media as “Canada’s answer to Snarky Puppy”. Sporting an all­-original repertoire the group has a fearless and muscular yet introspective sound likened to a cross between electric­-era Miles Davis and Rage Against the Machine. Taking elements from a wide variety of musical sources including jazz, funk, rock, and metal, Snaggle contextualizes them within the improvisational and spontaneous elements of the jazz ideology. Their uniquely brash and infectious brand of jazz­-funk is a melodically driven sound which incorporates primal groove qualities more commonly associated with pop and rock, swinging their live show from quietly contemplative all the way to explosively fierce,­ sometimes all within the same tune. The line­up of players in SNAGGLE includes the current Guinness Book of World Records record­holder for “world’s fastest drummer”, as well as some of the hottest 20­-somethings on the scene, representing the next generation of irreverent, boundary pushing Canadian players and composers. The Long Slog was produced by highly acclaimed Guru's Jazzmatazz trumpet iconoclast Brownman Ali, who also appears on 2 tracks, and who signed Snaggle to his label Browntasauras Records last year. This is their first recording on Brownman's label. Snaggle has been in high demand in the Canadian jazz festival circuit, and has been performing regularly in and around the Toronto area since 2013.