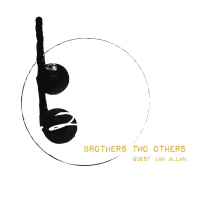 Nice hopping tune. Straight ahead jazz. Guitar leads the way, but everybody is blazing the trail on this composition.