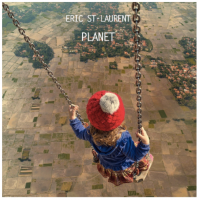 ...and there were little fluffy clouds, and they were beautiful man.... Cloud busting chill out guitar.

Internationally renowned guitarist Eric St-Laurent is excited to celebrate the release of his fourth album since 2010, entitled Planet. Planet features his regular trio with Jordan O'Connor on bass and Michel DeQuevedo on percussion as well as new collaborator and bandmate Attila Fias on piano. Recorded on the heels of a wildly successful tour in the spring of 2016, Planet features 5 originals by St-Laurent and 3 classic songs; Donna Lee (Charlie Parker), Call Me Maybe (Carly Rae Jepson) and the Theme from the Second Movement of the 8th Piano Sonata by Ludwig Van Beethoven. The group continues in it's mission to create joyful, uplifting melodies, freely borrowing from afro-cuban rhythms, blues, western classical music and of course, the current radio top 40. Born and raised in Montreal, St-Laurent studied improvisation in New York before moving to Berlin where he toured with both the big and small names of the German and Scandinavian music scenes. Winner of the SOCAN award for Best Original Composition at the Montreal Jazz Festival and The Best Band Award at the Vienne (France) Jazz Festival, St-Laurent has been featured on over 50 recordings, produced multiple albums, composed scores for short films and theatre, and toured extensively in Europe and Canada. Since returning to Toronto, Canada, St-Laurent has recorded and toured with Till Bronner, Dave Liebman, Dave Douglas, Rebekka Bakken, Slide Hampton, Luc de la Rocheliere, Sylvie Paquette, Richard Underhill, David Binney, Jojo Mayer, Carlos Del Junco, Bernard Primeau and represented Canada at the International Guitar Summit in Nice (MIDEM).

track of the day Planet Self Produced Eric St-Laurent