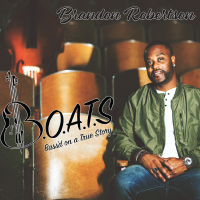 Warm enough to make you smile from the first bar.

Bassist Brandon Robertson is a ten year veteran of the Florida jazz scene. Bass’d on a True Story - his debut album as a leader - represents the first chapter of his musical autobiography. Its eight original songs were written over the course of the last 14 years. Each tune re flects something important in his development both as a person and as a musician. “Each song is attached to a memory that I hang on to; memories from significant moments in my life. From the birth of my kids to my experiences in New Orleans,” says Robertson. For this project, Robertson assembled a fine mix of collaborators from a range of jazz scenes in order to best fit each tune’s particular flavour. Throughout the aptly named album, you’ll quickly discover that Brandon is not your typical bass player. He’s as comfortable taking the lead on a tune as he is keeping time in the background. His solos reveal a deep sense of melody and are filled with unexpected rhythmic accents that enhance the musical conversation with his collaborators. Bass’d on a True Story will be released worldwide on Friday, September 13, 2019 by Slammin Media and Believe Distribution.