On A Personal Note by Cam Wharram 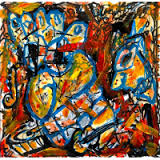 Album Title: When I Return
Label: Self Produced
Released: 0

It's a good job there's more than one personal note. Nice unison brass, not bolshie, and the bass --is possibly on a wind-up via the British National Grid, cheap at 3 times the price apparently.

"Nothing Personal" is a tune by Don Grolnick, and after hearing both his and Michael Brecker's versions of the tune, Cam Wharram penned a composition that had a similar vibe, but with a different form, chords, hits, and time feels. This one also features trombonist Jeff Galindo, who recorded this track fresh off a tour with Esperanza Spaulding! Check it out and enjoy...