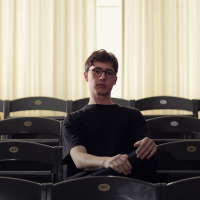 The original plan was to have Salvador write lyrics about cats, because my intention when writing the song itself was to mimic the behavior of a cat. But when I called Salvador to see how the process of writing the lyrics was going, he said ”I didn’t want to write about cats, so instead I wrote about your tree outside of your childhood house.” A few months before I had shown him a picture of the tree, and how its color changes through each season every year. So this song is about the dying and birth of a tree.

Like the sun rises and the fog melts away; More I let the world in, less I take in it; A Lisbon song; Last moment for a moon; Call me medieval; Fragments; O nosso abrigo; Mattias where are you; Story of a boy; Ok for us; When it gets red; Birds