Notes From Underground by Robert Sabin 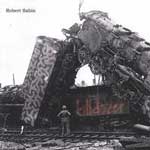 Loosely based on a deranged man's evil plan to build a town ravaging instrument of destruction in the form of a heavily armored and amunized bulldozer, Robert Sabin's first recording for Ranula Music presents a torrent of vulgar, howling mad, and sensitively reflective instrumental jazz, handcrafted for the enthusiastic audio ghoul.

Tourettes Guy; Notes From Underground; Killdozer; Evil Bob Takes A Nap; Red and Black; Nobody Does It Better.