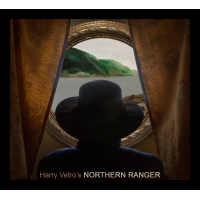 Northern Ranger the title track off Harry Vetro's album is the anthem to his travels and the finale to his album.