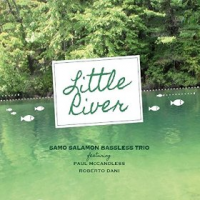 Beautifully distilled. Another gem from Salamon and McCandless' light touch a happy refraction.