Naked on a Train by Vinay Kaushal 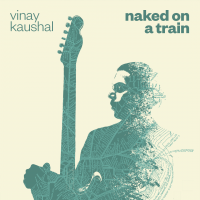 Album Title: Naked on a Train
Label: Self Produced
Released: 2018

Confident in the knowledge that an LA musician would give a girl the shirt off his back to save her humiliation, for the price of a song?

Nudity can be taboo, fun or sometimes very, very strange… This tune was born from one of those strange times. I suppose it was stranger for the person who was actually naked. It was early morning on the L.A. Underground and most of the city was still asleep. I was trying to grab a nap when a lady came running down the nearly empty train, completely naked and chased by two policemen. Taking advantage of my preference for aisle seats, she leapt over my legs and crouched on the seat next to me, her bloodshot eyes meeting my terrified ones. As the cops came closer, she jumped back into the aisle and ran out of the door onto the platform. The last I saw of her was through the window as the train pulled away. She was trying to run up the down escalator. Looking back, I hope she found her way to somewhere safe, to somewhere that nudity isn’t taboo and to somewhere where the escalators travel in the direction she needs them to.

Build Up; A Drop of Golden Sun; Naked on a Train; A Tune for Peace - An Interlude; For the Man with the Golden Fingers; Sea's Song.